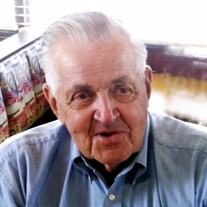 Will Pryer, 87, of Tulsa and Westville, Oklahoma died Wednesday October 27th surrounded by his family. Will was born January 15th, 1934, in Spokane, Missouri to Earl and Mearl Pryer. In 1952 he graduated from Ozark High School where he was a basketball player. Soon after graduation, he married Ann Plank his High-School Sweetheart, on July 12th 1953. Will volunteered to join the United States Marine Corps and moved to San Diego, California where he was assigned to the Marine Corps Field Artillery Operations. As the Korean War ended and his time in the Marines came to a close, Will and Ann moved to Tulsa, Oklahoma where they founded Pryer Machine and Tool Co., in 1965. Will enjoyed starting and owning Pryer Machine and Tool Co., many times he would be working late into the night and on weekends, he would say “If you love what you are doing, it is not work. Find a job that you love to do.” Will always referred to himself as a shy bashful personality, however he had a keen dry sense of humor. Will had many one liners. “I will not eat anything I cannot spell.” Or “I am in pretty good shape for the shape I am in.” Followed by a smirk as other laughed. Will and Ann married for 59 ½ years, enjoyed spending their latter years at their ranch near Westville, OK. They were members of Christie Southern Baptist Church, Will was an ordained Deacon. In the years preceding, they were members of Eastwood Baptist Church and Sheridan Road Baptist Church. Will was preceded in death by Ann his wife, Wilbur his brother and is survived by his sister, Novella Whittington (husband, John), Will’s four children: Carman Pryer Cole (husband, Randy), Cayla Pryer Brumble (husband, Marc), Scott Pryer (wife, Kay LaValley), all of Tulsa, and Angela Pryer Moore (husband, Jim ) of Little Rock, AR. 7 grandchildren, Jessica Mathias (husband, Jared), Justin Cole (wife, Jessica), Julie Chadwick (husband, Austin), Jared Cole (wife, Maria), Brent Pryer (wife, Michelle), Jacob Brumble (wife, Julie), Tyler Cole (wife, Kara) and blessed with 22 great-grandchildren. A Private family graveside will be held in Will Pryers honor. In Lieu flowers, donations may be made in his honor to the Oklahoma Baptist Homes for Children. www.obhc.org

Will Pryer, 87, of Tulsa and Westville, Oklahoma died Wednesday October 27th surrounded by his family. Will was born January 15th, 1934, in Spokane, Missouri to Earl and Mearl Pryer. In 1952 he graduated from Ozark High School where he was a... View Obituary & Service Information

The family of W. E. "Will" Pryer created this Life Tributes page to make it easy to share your memories.

Will Pryer, 87, of Tulsa and Westville, Oklahoma died Wednesday...

Send flowers to the Pryer family.