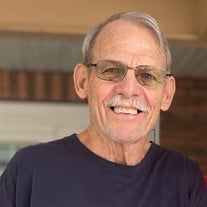 William Ben "Bill" Austin, 76, of Tulsa, OK, passed away on February 9, 2022. Bill was born on September 21, 1945, in Kansas City, Kansas to the late Oliver Kenneth "O.K." Austin and Helen Lorene (Powers) Austin. Bill graduated Bartlesville high school and entered the Air Force in October of 1963, serving his country proudly during the Vietnam Era as an experimental aircraft jet engine mechanic. After being honorably discharged, he moved to Tulsa, OK where he married Barbara Kay (McCord) Austin in 1971 and raised their five children around the Tulsa area where they were active in the community, church and youth sports. Bill had a lifelong passion for cars, trucks and auto racing, and he took his children to these events every chance he could. He volunteered as an assistant youth soccer coach for several years and instilled in his children commitment and loyalty. He earned his applied electronics degree and worked for Tommy Vendors and R&M Amusement on music and arcade machines. He later returned to aviation, where he worked for more than 25 years at Nordam Aerospace. He manufactured and repaired thousands of flight controls installed on nearly every major airline company operating today. In addition to his parents, he was preceded in death by his wife Barbara and sister Helen "Kay" Austin. He leaves behind his sons Evan Austin, Blair Austin and wife, Shauna of Edmond, OK; Trevor Austin and Drew Austin; daughter Koren Stika and husband, John of Broken Arrow, OK; Granddaughters Kaylee, Ella, Bree and Ally; Brother Ron Austin of Tishomingo, OK and sister Vicki Auld and husband Matt of Grain Valley, MO. A memorial service will be held at 3:00 p.m. on Wednesday, February 16, 2022 at Floral Haven Funeral Home Chapel with Pastor James Lacey officiating.

The family of William "Bill" Austin created this Life Tributes page to make it easy to share your memories.

Send flowers to the Austin family.