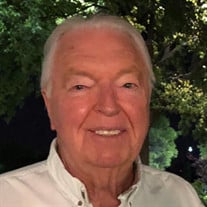 William "Bill" Carroll Hightower died August 17, 2021, at age 82 in Tulsa, Oklahoma. He passed into the next life after a courageous battle with COVID-19, surrounded by loved ones who will continue to honor his legacy by living their lives to the fullest. William Carroll Hightower was born on November 2, 1938 to Robert and Hazel Hightower in Gregg County, Texas. In the fifth grade his family moved to Midland, Texas. Bill took pride in his Texas roots. He was a strong, confident, gun toting, boot wearing, gritty Texan. He spent his early childhood outdoors where he developed a great love for nature. This love of the outdoors taught him how to be observant, respectful of nature and to find beauty in the simple things of life. Fishing, hunting and shooting guns were some of his favorite activities. Even while relaxing inside, you could find Bill’s spirit drawn to the outside world as he watched the wind blow through the trees and the birds and the squirrels scurry in the yard. After attending the University of Texas Permian and TCU. Bill pursued different professional work in the oil industry and Alfa Romeo sports car sales. Bill chose to serve his country by enlisting with the US Navy during the Vietnam War. Bill served active duty on the nuclear submarine USS John Marshall SSBN611. He was stationed in Holy Loch, Scotland. He was a member of the navigation unit aboard the submarine and he participated in five patrols during the Vietnam War. He had a very deep love of country and was proud to serve the United States of America After his active duty and honorable discharge from the US Navy, Bill joined IBM in Huntsville, Alabama as an associate engineer stationed at the NASA Space Flight Center where he worked on the inertial stabilizer for the Saturn rockets. Bill spent several years in engineering and had multiple relocations with IBM. He then decided to make a career change into sales which eventually led him to Tulsa, Oklahoma. Bill finished his professional career in management for communication and technology companies. Bill retired in 1998 and shifted his focus to raising his youngest two boys. Raising strong, independent children was of paramount importance to Bill. He was very devoted to his family and fiercely protective. He was a nurturing father with a gentle spirit, but never was it mistaken for weakness. He was also a great cook, prankster and a patient teacher of life’s lessons. He loved his children dearly and was so proud of the three young generations of Hightowers. Bill was a pillar of strength, patience, humor and a lifelong learner and patriot. He was a silent leader whether it was at Thanksgiving, taking care of loved ones, or in a work setting. His stable presence seemed to keep us all grounded. Like his big strong hands that could fix even the tiniest repair, his kind, gentle nature could leave a strong impression. His presence will be forever missed and his boots will be hard to fill. Bill was survived by his wife, Beth Hightower; children, Bret Hightower and wife, Teresa, Kim Groves, Tom Hightower and wife, Bridget, John Robert Hightower; grandchildren, Kristen Pennington, Samye Stevens and husband, David, Blake Hightower and wife, Hannah, great-grandchildren; Josiah Stevens, Audrey Stevens, Baylor Hightower; sister, Robbie Fellows and many nieces, nephews family members and friends. Bill was preceded in death by his parents, Robert John Hightower and Hazel Lou Hightower (Smith); sister, Billie Hightower and his grandson, Daniel Hightower. In lieu of flowers donations can be made to Folds Of Honor @ https://foldsofhonor.org/ The family will be having private graveside services.

William "Bill" Carroll Hightower died August 17, 2021, at age 82 in Tulsa, Oklahoma. He passed into the next life after a courageous battle with COVID-19, surrounded by loved ones who will continue to honor his legacy by living their lives to... View Obituary & Service Information

The family of William "Bill" Carroll Hightower created this Life Tributes page to make it easy to share your memories.

Send flowers to the Hightower family.