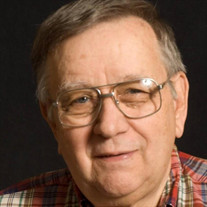 William Charles (Bill) was born June 18, 1938, in Watova, Oklahoma, the youngest of 6 boys. All have predeceased him, as have his parents, Paul and Dorothy Egermeier. He decided to go to college at the University of Oklahoma, even though his brothers had picked Oklahoma State University. He also took classes at Tulsa University. He worked for the Oklahoma Highway Department while attending college. Other jobs included: Bowling Alley/Pro shop, Sears, Breich Engineering Co, Fell, Brusso, Bruton, Inc., Leland Equipment Company, (where he started as Engineering Technician and ended up as Director of Engineering). Fleet Body Engineering. Then to Heber Springs Arkansas and several trips to the home office in Germany for Walther Corporation. Bill and Sherry met at a square dance in Claremore, Okla. In December 1971, dates followed, then marriage on April 28, 1972. 49 years of marriage makes you mellow. Bill was a handy-man. He could fix almost everything and make beautiful furniture, bookcases, cabinets, rotunda table, praying benches, and crosses for the various churches he served. He served on Southpark Church of God and the Heber Springs Nazarene Church boards. Bill had 4 children with his wife Gillian and although not real close during their growing up years, the boys have proven to be the kind of men their father was very proud of. He enjoyed being with Mark because they could “talk tech” with each other. He enjoyed visits from Mike for the last 2 or more years every Wednesday. They didn’t talk much, neither of them were great talkers, but both seemed to enjoy their time together. Bill loved to travel and he and Sherry went to Arkansas, Washington D.C., Kentucky, Texas, and several trips to Colorado. Sometimes with her parents joining them. Bill loved to trout fish and a good time was had by all. Bill succumbed to a stroke on November 15, followed by another stroke on December 5, when he went peaceably to join his brothers and parents in heaven. For those that cannot attend the service in person are welcome to watch the service via the following link: https://webcast.funeralvue.com/events/viewer/64870/hash:DECB01F9D862D3E7

William Charles (Bill) was born June 18, 1938, in Watova, Oklahoma, the youngest of 6 boys. All have predeceased him, as have his parents, Paul and Dorothy Egermeier. He decided to go to college at the University of Oklahoma, even though his... View Obituary & Service Information

The family of William C Egermeier created this Life Tributes page to make it easy to share your memories.

Send flowers to the Egermeier family.