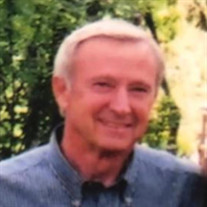 William Paul Land, 82, of Claremore, passed away September 10, 2021. He was born February 8, 1939 in Pryor, OK to Harry & Vesta Land. Paul was raised in Pryor as a child and later the family moved to Tulsa. Paul attended Will Rogers High School and was active in The First Christian Church . He enjoyed being a part of their youth program, playing baseball in church league, and it was also there he would meet the love of his life, Janet Lewis. They were married in 1961 and enjoyed 43 happy years of marriage. Paul’s biggest enjoyment was his time with his family. Family trips to Branson were one of his favorites or taking his wife on a cruise. He was always ready to go. He was a very loving and devoted husband, father, and grandpa, and always a very active part of his daughter’s and grandchildren’s lives. One of his greatest joys was being a grandpa and great-grandpa. Paul retired after many years at Rockwell International and Boeing. During his retirement he enjoyed many activities including golfing & fishing, working on computers with his friends and having regular chili lunches with his fellow retirees. Paul enjoyed an occasional woodworking project or tinkering in his shop. He could fix almost anything and no project was ever too large. He was always on hand to help fix just about anything without being asked. Paul was proceeded in death by his wife Janet, his parents Harry & Vesta Land, and brother Karl Land. He is survived by his daughter Lori Mullins and husband Bryan of Claremore, Brother Mark Land & wife Joan of Owasso, Sister Cornelia Stewart & husband John of Kingston, WA, Granddaughter Ashley Hanchett & husband David of Verdigris, Grandson Robert Webb & wife Ashley of Bixby, Great grandchildren, Esther, Andrew and Caleb Hanchett, many nieces, nephews and close friends. ***FOR THOSE THAT CANNOT ATTEND THE SERVICE IN PERSON, PLEASE COPY AND PASTE THE FOLLOWING WEB ADDRESS IN YOUR BROWSER OR CLICK ON THE LINK: THE LIVE STREAM WILL START AT APPROXIMATELY 9:45 AM. IF YOU DO NOT SEE THE LIVE FEED, PLEASE REFRESH THE PAGE UNTIL IT APPEARS*** http://webcast.funeralvue.com/events/viewer/60637

William Paul Land, 82, of Claremore, passed away September 10, 2021. He was born February 8, 1939 in Pryor, OK to Harry & Vesta Land. Paul was raised in Pryor as a child and later the family moved to Tulsa. Paul attended Will Rogers High... View Obituary & Service Information

The family of William Paul Land created this Life Tributes page to make it easy to share your memories.

Send flowers to the Land family.