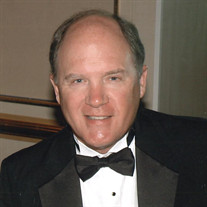 William Stanley Mathias, 68, of Tulsa, Oklahoma, passed on into a heavenly embrace on January 19th, in Tahlequah, OK. Born May 29th, 1953, in Nashville, Tennessee, to Louise Stone and William Alvia Mathias, Stan attended Waverly Central High School. He received a BA degree from Middle Tennessee State University and was a member of Alpha Gamma Rho fraternity. For many years, he resided in Chattanooga, and was involved for over 20 years with Bayside Baptist Church, where he taught Sunday school. He loved to cruise his boat down the Tennessee River to Neyland Stadium for a Volunteer game, any chance he could. Stan began his professional career at Global in Waverly, Tennessee and eventually started his own company, Mathias Metal Systems in the same community. He was a member of the Waverly United Methodist Church. In Volunteer offseason, he could be found enjoying any number of lakes and rivers, waterskiing, and pulling kids and grandkids behind his boat. He also enjoyed a walk on the beach at sunset or a drive around the farm in his Kawasaki. Stan was passionate about making memories with his wife Melanie and loved to travel. In 2019 he experienced his first trip to Israel. He was a gregarious, fun-loving, sharp businessman, who cherished every moment he had with his grandchildren and dogs. There was never an occasion too small to not be captured with a camera and stamped with a smile. Stan is preceded in death by his parents Louise Stone and William Alvia Mathias, as well as his grandson, William Baker Colvard. He is survived by his beloved wife Melanie Walker Mathias of Tulsa, Oklahoma, his daughter Crispin Mathias Fisher and husband Matthew, daughter Kali Mathias Bennett and husband Cooper, daughter Carrie Colvard, son Chris Colvard and wife Emily, daughter Callie Bennett and husband Adam, his sister Susan Bishop and husband Jeb, and sister Sandra Louise Mathias. “Grandstan” also leaves behind 8 precious grandchildren, along with nieces, nephews, extended family, and friends. Funeral services will be held January 28th, 1:00pm at Abiding Harvest Church in Broken Arrow, OK. In lieu of flowers, Stan would be proud for any and all contributions in his memory to be made to Emerge Global, Inc., 8263 South Harvard #122 Tulsa, OK. 74137, an organization that supports single mothers in their journey toward healthy independence. We appreciate your thoughts, prayers, and attendance as we celebrate the life and legacy of Stan. Please click the link below for live stream of the service. http://facebook.com/AbidingHarvestUmc

The family of Stan Mathias created this Life Tributes page to make it easy to share your memories.

William Stanley Mathias, 68, of Tulsa, Oklahoma, passed on into...

Send flowers to the Mathias family.