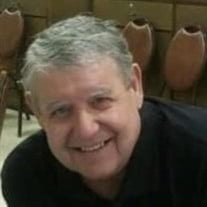 William Francis Remmert, known as Bill to his family and friends, passed away April 24, 2020 in the early morning hours at his residence in Broken Arrow, Oklahoma with his wife and friend of over fifty years, Nancy Remmert by his side. Bill was sixty-nine years young and never lost his sense of humor through his yearlong battle with cancer. One of his most memorable traits just might have been his larger-than-life and heartwarming laugh. He was born April 30, 1950 in Great Bend, Kansas to parents Bill G. Remmert and Alice Marie Remmert. He was the eldest of eight siblings. Bill was preceded in death by his parents and his youngest brother, Mark Remmert, and his beloved dog Woody who were all undoubtedly rejoicing at their reunion. In his younger years, Bill worked in the oil industry and greatly enjoyed the stock car races at the Tulsa Speedway. After races they used to go for pizza and beer at a local establishment. One of his favorite stories and claim to fame was how they used to tip a young and undiscovered Garth Brooks to not play his music so they could hear each other talk. He collected all kinds of cars from diecast to the real thing, spent hours assembling model airplanes, was an avid Sooner football fan and loved all things about history especially when it came to The Alamo and the Civil War. He couldn’t get enough of the old Westerns and even had his first date with Nancy while going to see “Butch Cassidy and The Sundance Kid.” Later in life, he became a self-made handyman which was befitting of him because there wasn’t much he couldn’t figure out. He had a knack for mathematics and was gifted in being able to intuitively, reverse engineer any project that was laid in front of him. It wasn’t until later years that Bill discovered private security and was proud to be the gun toting and peacekeeping, Captain Remmert to his troops. Bill is survived by his wife, friend and partner, Nancy Jean Remmert and his four children: Jennifer Michelle Remmert Quisenberry, William Ryan Remmert, Jeremy Michael Remmert and Sara Alice Remmert and eight grandchildren: Catherine Remmert (12), Charles Remmert (10), William Remmert (8), Henry Remmert (8), Sloane Quisenberry (7), Lucy Remmert (6), Conrad Quisenberry (6) and Alivia Wise (5). A funeral service will be held on April 30, 2020 at 10am to celebrate Bill’s life on what would have been his seventieth birthday. In this time of limited gathering due to COVID-19, the family will notify extended family, friends and mourners of a future event where people can once again assemble, remember and celebrate him and the loving legacy he left behind. For those unable to attend the service, please follow the link for webcasting. View Funeral Webcast

William Francis Remmert, known as Bill to his family and friends, passed away April 24, 2020 in the early morning hours at his residence in Broken Arrow, Oklahoma with his wife and friend of over fifty years, Nancy Remmert by his side. Bill... View Obituary & Service Information

The family of William "Bill" Remmert created this Life Tributes page to make it easy to share your memories.

William Francis Remmert, known as Bill to his family and friends,...

Send flowers to the Remmert family.