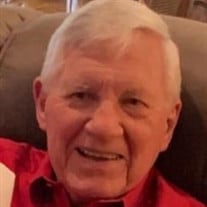 William Orville Stinnett, 83, resident of Tulsa, Oklahoma passed away March 10, 2020. Orville was born July 12, 1936 in Sallisaw, Oklahoma to Faxon and Mary Stinnett. Orville graduated from Sallisaw High School in 1954 and then attended Connors State Agricultural College and Northeastern State College and obtained a B.S. in Education in 1959 and later completed a Masters in Counseling and Administration. During his time at Connors State he met the love of his life, Frances Jo (Jodie) Etheredge of Muskogee, Oklahoma, and they were married on December 26, 1959. They eventually settled in Tulsa where Orville was a beloved teacher, counselor and Vice Principal in the Tulsa Public School System. He retired from Tulsa Public Schools in 1987 but became restless and “unretired” to work for Tulsa Teachers Credit Union through December 1998. Orville was a wonderful son, brother, husband, father and doting grandfather. He treasured time with his family above all. Many weekends would find him taking his van, brimming with Jodie and their family, to visit his parents and his sister’s family in McKey. They spent a lot of time outdoors – skeet shooting, swimming, working in Grandpa Fax’s garden, and chasing grandkids through the woods. He also loved to fish with his brother and friends and for many years looked forward to an annual fishing trip in Canada. (it was the only time we got to see him with a beard!) He looked forward to the annual Stinnett family reunion. He was an avid history buff, especially related to the Civil War and WWII. He and Jodie enjoyed traveling to historical places, and certainly a highlight was visiting Pearl Harbor in 2008. He shared his father’s passion for tomatoes and grew several varieties each year. He had a generous heart and always ensured his family was taken care of. He will be remembered as our rock – we could come to him with anything at any time and would be comforted to know that we would never be judged, only supported. He was preceded in death by his parents, Faxon and Mary Stinnett and is survived by his wife, Jodie; daughter, Jana Buchman and her husband, Scott; son, Joel Stinnett and his wife, Melinda; grandchildren, Drew Buchman, Amber McMurrian and her husband, Kyle, Amanda Stinnett, Nate Stinnett and his wife, Shanyn, Josh Stinnett, Sarah Stinnett; great-grandchildren, Miley Buchman, Paxton McMurrian, Bodie McMurrian; brother, Charles Stinnett and his wife, Linda; sister, Yvonne Green and her husband, Doyle and numerous nieces, nephews, cousins, family members and friends. Visitation will be 4-6 pm, Sunday, March 15, 2020 at Floral Haven Funeral Home. Funeral Service will be 12:30 pm, Monday, March 16, 2020 at Floral Haven Funeral Home Chapel. In lieu of flowers donations can be made to Alzheimer's Association at alz.org

The family of William Orville Stinnett created this Life Tributes page to make it easy to share your memories.

Send flowers to the Stinnett family.