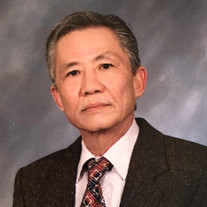 William An Tieu, 72, passed away on December 1, 2020, in Tulsa, Oklahoma. He was born November 1, 1948, in Vietnam. During the Vietnam War, at the very young age of 19, An worked as a translator/interpreter for the US Armed Forces for seven years before fleeing to the US with both his and his wife’s families along with their son, Joe. When Vietnam fell in 1975, he and his family landed at Ft. Chaffee refugee camp in Fort Smith, AR. He immediately began working at the refugee camp’s data center as a janitor. However, because he was so inquisitive about the data center and its operations, they began to show and train him in computers. Shortly after arriving at Ft. Chaffee, the families of John Knox Presbyterian Church in Tulsa, Oklahoma sponsored An and his family under the Vietnamese Resettlement Program. They relocated to Tulsa, Oklahoma, and have called it home for the past 46 years, with their second-generation growing up here now. Within two years of establishing residency in Tulsa, An worked two jobs and saved enough earnings to purchase a house, two cars, and material goods necessary for his young family. He achieved many accomplishments throughout his life in Oklahoma; becoming a naturalized citizen, starting a long career with computers and obtaining an Associate’s Degree in Computer Science while working full time, and raising a family to name a few. An continued to advance his profession as a mainframe systems operator and programmer until his retirement. Over the course of his life, he worked hard to give his family the “American Dream,” where he would save and scrimp to afford his children a better life than he had. If it was not for An and his position and relationship with the US Armed Forces, he, his, and his wife’s family would not be where they are today. For years, he tirelessly petitioned the Department of Justice Immigration and Naturalization Service for their admittance and was responsible for bringing over twenty family members to the US. He often devoted time to the church to help with other refugee families, participated as a member of the congregation, and also served as a trustee during his 46 years with John Knox. One of his favorite church activities was bringing food to the needy during the holidays as a way to give back to those that paid it forward years ago for his family. An was married to Anh for 47 years and out of this union, they had two children, Joe and Diana. He was a dedicated husband and father who took great care of his family and extended family. He loved his family, fishing, trading on the stock market, smoking cigars, spending hours in the yard, and talking about the past and traditions. An is survived by his wife, Anh, son and daughter-in-law, Joe and Cheryl, daughter and son-in-law, Diana and Sywei, and grandchildren, Kate, Emilia, and Elliott. He also leaves behind numerous siblings, cousins, nieces, nephews, and friends. An's favorite charity was the Wounded Warrior Project - https://support.woundedwarriorproject.org/default.aspx?tsid=10043&ovr_acv_id=5246.

William An Tieu, 72, passed away on December 1, 2020, in Tulsa, Oklahoma. He was born November 1, 1948, in Vietnam. During the Vietnam War, at the very young age of 19, An worked as a translator/interpreter for the US Armed Forces for seven... View Obituary & Service Information

The family of William An Tieu created this Life Tributes page to make it easy to share your memories.

Send flowers to the Tieu family.