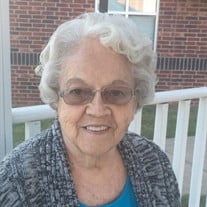 Wilma Erla (Mowry) Faber was born April 27, 1933 in Sayre, PA, to Wilmer and Myrtle (Irons) Mowry. Wilma attended primary and Jr. High School in Sayre and Kingston, PA and graduated from Barringer High School in Newark, NJ, Class of 1951. After graduation, she became a student at the Robert Packer Hospital School of Nursing, Sayre, PA. She became a Registered Nurse with the Class of 1954. Wilma accepted Jesus Christ as her Lord and Savior at the age of eight and was Baptised at Sayre Baptist Church. Wilma met the love of her life William (Bill) Faber in Newark, NJ in 1951, shortly after he immigrated from the Netherlands. Wilma completed nursing school while Bill served in the Air Force. They married August 27, 1955 in Newark, NJ and moved to Tulsa where Bill had accepted a job with American Airlines. Bill and Wilma were charter members of Garnett Road Baptist Church where they put down roots, worshiped, taught, served and raised their children. They were members of the church the remainder of their lives. They made many friends through the years who fulfilled the roles of aunts, uncles and cousins to their children. Bill and Wilma started a retirement fellowship and worship group, the Roadsters and hosted Thanksgiving dinner for Church families and local community members with the help of multiple church members for many years. Wilma was preceded in death by her husband of 53 years Bill, her parents Wilmer and Myrtle Mowry, her sister and brother-in-Law Mary Alice and Donald Green, their closest friends (partners in crime) Marvin and Mary Lou Holloway, and her grandson Jordan Morris. Wilma is survived by her children Walter (Becky) Faber, Bill (Cathy) Faber and Nita (Brett) Morris, 10 grandchildren, 11 great grandchildren with number 12 on the way, and many Nieces and Nephews.

The family of Wilma Erla Faber created this Life Tributes page to make it easy to share your memories.

Send flowers to the Faber family.