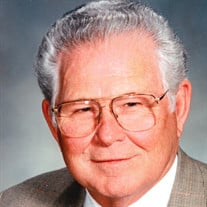 Woodrow Edward Norwood, 83, passed away January 5,2021 at his home in Broken Arrow, Oklahoma surrounded by his family. He was born to Josh and Inez Norwood on August 17,1937 in Webbers Falls, Oklahoma. Woody is a 1955 graduate of Tulsa Webster High School and went on to play football at Northeastern State University in Tahlequah, OK. He was a member of the NAIA 1958 National Championship Football team at NSU. In 1960 Woody obtained his bachelor’s degree of Education form NSU. His continuing education was important to him as he completed his Master of Science degree from OSU in 1964. Woody’s shining academic moment came in December of 1986 when he graduated with his Doctorate of Education from the University of Tulsa. Dr. Norwood was an accomplished Tulsa Public School principal for 25 years, which included being President of the teacher’s association and many other duties. After retiring from TPS, Woody moved on to Oral Roberts University as an established professor for many years. He was recognized as one of the top faculty members voted by his peers. Woody was a cornerstone member of Abiding Harvest United Methodist Church in Broken Arrow, Oklahoma. He was a proud American and cherished his time with the United States Marine Corps. Woodrow Norwood was survived by his wife of 60 years, Doris Norwood. His son, Scott Norwood of Eastland, Texas and his daughter Nancy Coppenger of Noblesville, Indiana. Woody’s sister, Charlotte Anderson and her husband Greg Anderson of Catoosa, Oklahoma. Woody loved his 3 grandchildren Elizabeth Evans, Zachary Coppenger and Matthew Coppenger and great grandchild Paxton Evans. His nephew Steffan Anderson, niece Sarah Anderson and nephew Joshua Anderson were loved by Woody. A viewing will be held Sunday January 10, 2021 from 2-5pm at Floral Haven Visitation Suites. Funeral service will be a celebration of Woody’s life on January 11, 2021at 11am at Abiding Harvest United Methodist Church with interment to follow at Floral Haven Cemetery. Donations may be made in his honor to the Alzheimer’s Association in Dr. Woodrow Norwood’s name.

Woodrow Edward Norwood, 83, passed away January 5,2021 at his home in Broken Arrow, Oklahoma surrounded by his family. He was born to Josh and Inez Norwood on August 17,1937 in Webbers Falls, Oklahoma. Woody is a 1955 graduate of Tulsa Webster... View Obituary & Service Information

The family of Woodrow Edward Norwood created this Life Tributes page to make it easy to share your memories.

Send flowers to the Norwood family.