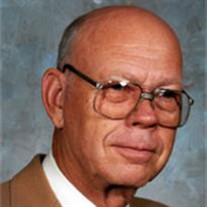 Woodrow (â??Woodyâ?) Warren Wilson, 93, of Tulsa, Oklahoma, passed away peacefully on January 21, 2012. Woodrow was born to Clarence and Grace Wilson in Barr, Oklahoma (near Enid) on September 2, 1918. His early years were spent on a farm near Drummond with this brothers and sister. Much of his humor and wit was borne from summertime mischief with his siblings and cousins. Â After graduation at age 16 from Barr County High School in 1934, he enrolled at his Motherâ??s alma mater, Oklahoma A&M in Stillwater. He served for a short time in the National Guard with his best friend, Oscar. Then they worked through college as firefighters, graduating in 1942, with degrees in Fire Safety Engineering. Â It was while in Stillwater where Woodrow met the love of his life, Bernadene Pryor. Bernadeneâ??s sister Ruby, had married Woodrowâ??s older brother Howard earlier that year. Woodrow wasted no time and August 31, 1941 was the happy beginning of seventy wonderful years of marriage to Bernadene. Â After college, Woodrow took a job with the Oklahoma Inspection Bureau. In 1946, he embarked on a career in fire sprinkler contracting which evolved into Wilson Fire Protection, Inc., a successful family business until it was sold in 1981. He served for several years as President of the National Fire Protection Trade Assn. Â In addition to starting a new business, Woodrow and Bernadene began a family. They moved to Tulsa in 1947 and he became a dedicated community leader. He served on several mayoral advisory committees assisting in the development of city building fire safety codes. He served as president of a local civic club, was active in the Salvation Army, a member of the the Tulsa Chamber of Commerce, as well as being a frequent speaker at public events. He was a model businessman and a mentor for the many people he met throughout his career. Â Woodrow was an active member of Centenary United Methodist Church for 31 years, 17 years at First UMC in Sand Springs, and the last 15 years at Christ United Methodist Church. Teaching Sunday School was one of his passions, and he taught what he believed â?? honesty, fairness, and a deep faith. After retirement from Wilson Fire Protection in 1981, Woodrow and Bernadene traveled the globe. In addition to traveling, his hobbies included gardening, golf and spending time with his grandchildren. Â Everyone close to Woodrow knew of his love of growing roses. He expertly tended to his rose garden for as long as he was able. The first and last rose of the season were always given to Bernadene. Woodrow was as sweet as his roses, and they will always have a special significance because of him. Â Woodrow is preceded in death by his parents, his sister Virginia Newman, brother-in-law Howard â??Ripâ? Newman, elder brother Howard and younger brother Dale. He is survived by his beloved wife of seventy years, Bernadene Amelia (Pryor) Wilson, sons Roger (Valerie) and Crist (Cherie), daughters Judy Harnden and Janis Bhow (Nilesh), and daughter-in-law Shelle Wilson, all of Tulsa. He has ten grandchildren and ten great-grandchildren who all cherish fond memories of their sweet â??Grandpa Woodyâ?. Â A memorial service will be held at Christ United Methodist Church (Tulsa) on Monday, January 30, at 2:00 pm. A reception will follow in the Wesley Classroom Rm. 136. In lieu of flowers, donations can be made to Good Shepherd Hospice of Tulsa or to Christ United Methodist Church.

Woodrow (â??Woodyâ?) Warren Wilson, 93, of Tulsa, Oklahoma, passed away peacefully on January 21, 2012. Woodrow was born to Clarence and Grace Wilson in Barr, Oklahoma (near Enid) on September 2, 1918. His early years were spent on a farm near... View Obituary & Service Information

The family of Woodrow Warren Wilson created this Life Tributes page to make it easy to share your memories.