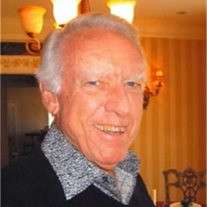 Lee Woodward, long time local celebrity & Weatherman at KOTV, Channel 6, died Monday, June 19th at his home in Tulsa. He was 85. Born Coulter Lee Woodward on September 22, 1931 in Fort Worth, Texas, he was the youngest and fifth son of Dr. and Mrs. Valin Ridge Woodward or Arlington, TX. Lee attended Arlington High School & North Texas State in Denton, Texas where he studied vocal music. He was a Marine Veteran during the final years of the Korean War. While attending North Texas State, Lee began his long career in broadcasting as a Disc Jockey at KDNT where he met and worked with Willie Nelson. On a recommendation from Willie, Lee was hired by WBAP in Fort Worth where he continued to hone his signature voice and broadcast style. His first foray into TV came shortly after at KRBC in Abilene. A weekend trip back to Arlington in June of 1956 reconnected Lee with a younger classmate, Amelia Merritt. They married in 1957 and moved to Tulsa where Lee had secured a position at KOTV Channel 6 as a “staff announcer.” A twenty-five-year career at KOTV followed. Lee hosted the Sun Up morning show & performed other broadcast journalism tasks early on, but he is best known for his long tenure as the evening weatherman and creator of “Lionel,” his dry-humored, sometimes befuddled lion puppet sidekick. After the children’s show, King Lionel’s Court, ended, public demand brought Lionel back to the evening news where he and Lee dominated evening news ratings during the late 1960’s and 70’s, providing witty social and political commentary at the end of every newscast. Lionel’s birth is one for the storybooks. Found in a prop case in the KOTV attic, Lee researched the puppet, refurbished it & ordered the last 4 in existence from a novelty store in New York. He taught himself ventriloquism & developed a voice for each puppet, partly to amuse his newborn son. That creative impulse was typical of what drove Lee toward artistic success his entire life. He was a self-taught painter and sculptor and his artwork fills his & many of his family and friend’s homes and offices. An accomplished tenor and passionate opera aficionado, Lee was a long supporter of Tulsa Opera & Tulsa Philharmonic, where he was invited to sing on many occasions. With Lionel, he emceed over 26 children’s benefit concerts for the Tulsa Public School system. Lee had the honor of singing at the opening of the 1969 Oklahoma Legislature & used his singing all through his years of broadcasting. Those dining at the Celebrity Club on any given weekend might find Lee singing impromptu in the bar along with the pianist after dinner. A lover of all the arts, Lee and his wife, Amelia, frequently attended Tulsa Ballet and were proud to show off Philbrook and Gilcrease to out of town visitors. An avid and passionate golfer, he was a regular at LaFortune, Indian Springs and Rolling Hills golf courses, to name a few. For many years he had a “scratch” handicap and was proud to “shoot his age” when he was 75, 76 and 83. Lee was the Emcee on the First Tee for many years at the annual Roy Clark Celebrity Golf Tournament which benefitted the Children’s Medical Center. Another passion was aviation and cars, and after Lee retired from KOTV in 1982 he worked full time for Thomas Cadillac, with which he was already affiliated. Along with his artistic prowess, Lee will be remembered for his dry wit and sharp intellect. Lee was preceded in death by three brothers, Col. Valin R. Woodward of Albuquerque, N.M., Dr. Stanley Woodward of New Braunfels, TX, and Dr. Lewis Woodward of Modesto, CA. He is survived by his loving wife of sixty years, Amelia; brother Morgan Woodward of Hollywood, CA; son Stanley Woodward and daughter-in-law, Judy, of Dallas; daughter Valerie Naifeh and son-in-law, Brad, of Oklahoma City; son Matthew of Las Vegas, NV. Grandchildren Grace & Stephanie Woodward of Dallas, Megan Fleischfresser and Leigh Naifeh of Oklahoma City, and great granddaughter, Agnes Fleischfresser, of Oklahoma City, and many nieces and nephews. In lieu of flowers, please make donations to the Tulsa Opera, Tulsa Philharmonic, Tulsa Ballet or charity of your choice. An online guestbook is available by visiting www.floralhaven.com. Private funeral service.

Lee Woodward, long time local celebrity & Weatherman at KOTV, Channel 6, died Monday, June 19th at his home in Tulsa. He was 85. Born Coulter Lee Woodward on September 22, 1931 in Fort Worth, Texas, he was the youngest and fifth son of Dr.... View Obituary & Service Information

The family of Woodward Coulter Lee created this Life Tributes page to make it easy to share your memories.