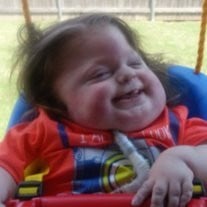 Wyatt B. Griffith, 2, of Tulsa, died on Tuesday, September 24, 2013. He was born in Tulsa on October 30, 2010, the son of Joshua and Jacqueline Griffith. Wyatt is survived by his grandparents, Jack & Renae Marshall and Danny and Teresa Griffith, great-grandmothers, Gerry Kennemer, Frankie Marshall, Naomi Morgan, and Fay Griffith, aunts & uncles, Natalie Lowery, and Ryan & Amy Marshall, cousins, Kaleb Lowery, Connor Lowery, KamiLynn Marshall, Brynlee Marshall, Beckett Marshall, and Harrison Marshall.Below is a message from Wyatt’s family that was written before his death. They want to share it again with you now…For those of you who don’t know Wyatt’s story, I thought I would just give you a little history…For those of you who do know his story and have been by our sides, there are no words that could describe how much your love and support mean to us.On a crazy night in October, while shopping for trick-or-treat candy at Sams I knew something felt…well…weird. After powering through the shopping and dinner I finally turned to my mom with a simple little question, “so what exactly does labor feel like?” Haha! On October 30, 2010 a little (REALLY LITTLE=4lbs 10oz) fighter was born properly named Wyatt Bryan Griffith. Little did we know when we picked the name Wyatt that it meant “little warrior”, “brave”, “strong”. HMMMM… how fitting. After sitting, crying, screaming and yelling for 6 hours with ZERO information on what was going on, we finally got more information than we knew what to do with. Our little man had been diagnosed with Hypoplastic Left Heart Syndrome and also had a rare chromosome abnormality. The doctor may as well been speaking another language to us! Today we could use more medical terminology than I ever knew there was! For those of you who are more curious…pretty much the left side of his heart did not develop correctly…and his genetics…well are his own! (you can Google it if you feel the need!)Wyatt had his first open-heart surgery when he was 12 days old. And he came through it like the trooper he is! We were told that he would probably never leave the hospital…but he did. After that we were told to only expect 6 months with him…well…he’s almost 3! So obviously God and Wyatt have their own plan and we are just going along with it. When he was 5 months old he had his second open-heart surgery. On November 1, 2011, we went in for his third open-heart surgery. A few hours into the procedure a nurse came out and explained that while trying to go through all the scar tissue that his heart had been nicked, which caused it to stop and therefore had no heartbeat, no oxygen to his brain for 18 minutes!!!! At that point the surgery was stopped and damage control began. They literally “put him on ice” and we had to just wait for him to wake up…which we were told was doubtful. Well…HE DID!!! Once again…its Wyatt’s way or no way! We made the decision then to go home and try that surgery again at a later time! In January 2012 we went back and he had a successful surgery. Wyatt had a rough Summer of 2012 when was admitted with an infection in his trach site…which turned into lung infections…which picked him up a free stomach virus from the hospital…which turned into kidney failure…which turned into 8 straight weeks in the hospital! And ONCE AGAIN…the doctors began to worry…but not Wyatt…he showed the “SUPERMAN” that he is and has been home and HEALTHY for over a year now! That tiny little miracle is now over 30 pounds!We enjoyed our first family vacation to Branson in December and he traveled like a pro! Although we don’t know exactly what the future holds (no one does!) We are excited with Wyatt’s new developments and the new things he is learning and accomplishing! He got a new wheelchair that he loves cruising in and a stander that he’s still getting used to. We also finally made the decision to trade our vehicles in and become mini-van parents! But not just any mini-van…a wheelchair accessible van that fits Wyatt perfectly! We are beyond blessed with love and support and thank God everyday for his love and renewing our Faith, whenever we begin to doubt.Thank you so much for reading about all the bragging I do on my little “Superman”. And more than that, thank you for being apart of his journey and the miracle we know he is!!!Love,The Griffiths

Wyatt B. Griffith, 2, of Tulsa, died on Tuesday, September 24, 2013. He was born in Tulsa on October 30, 2010, the son of Joshua and Jacqueline Griffith. Wyatt is survived by his grandparents, Jack & Renae Marshall and Danny and Teresa Griffith,... View Obituary & Service Information

The family of Wyatt B. Griffith created this Life Tributes page to make it easy to share your memories.