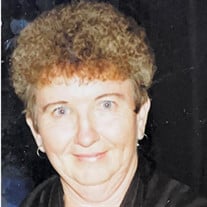 Wynomia Louann Mobley (Smith), 85, passed away on April 9, 2022. She was born on October 10, 1936, to parents Earl and Ethel Smith. She is survived by her children: Vickie Ann Medlock, Robert William Medlock, and wife Rhonda, and Christy Lynn... View Obituary & Service Information

The family of Wynomia L. Mobley created this Life Tributes page to make it easy to share your memories.

Send flowers to the Mobley family.