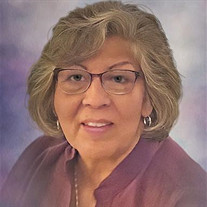 Yvonne Katherine Cahwee was born on March 29, 1950 in Claremore, OK and passed away on May 11, 2022 in Tulsa, OK. She was enrolled with the Absentee Shawnee Tribe of Oklahoma with Muskogee Creek and Seneca descent. Her tribal name was “Na-Ge-Ka-Ewa-Shee” (Beaver) and she was of the Water Clan. She attended Bowen Indian Baptist Church and Indian Falls Creek Baptist Assembly. Yvonne graduated from Tulsa Central High School in 1968 and continued her higher education at the Oklahoma Junior College where she received her Associates of Science degree in Computer Technology in 1984. She married her soulmate, Dwayne, in 1993 and was the mother to five children: Ray, Katherine, William, Tike, and Atira. In addition to being a devoted mama, Yvonne was employed throughout the years at the Tulsa County Assessor’s Office, Indian Health Service’s Office, and retired from River Spirit Casino in 2020 where she was awarded with Employee of the Year in 2016. Her hobbies included travel, sports, movies, concerts, and of course the casino slots. In her younger years, she enjoyed coaching and playing basketball, volleyball, softball, bowling, and pool. In her later years, she loved attending her children’s and grandchildren’s sporting events and watching the OU Sooner games every Saturday with her two boys Boogie and Scooter. She cherished the holidays and always had her home decorated for all seasons. Yvonne is survived by her husband Dwayne Cahwee; her three siblings: Eugene Alford Jr., Diane Guthrie, and Janene Alford; her three children: Ray Alford, Katherine Smith, and Atira Chapman; her seven grandchildren; and her six great-grandchildren. Preceded in death by her parents Eugene Alford Sr. and Davene Alford; and her two sons, William Alford and Tike Chapman. For those that cannot attend the service in person webcasting is available at the following link: https://webcast.funeralvue.com/events/northstar/73521/hash:2D884C13B3A8065D

Yvonne Katherine Cahwee was born on March 29, 1950 in Claremore, OK and passed away on May 11, 2022 in Tulsa, OK. She was enrolled with the Absentee Shawnee Tribe of Oklahoma with Muskogee Creek and Seneca descent. Her tribal name was &#8220;Na-Ge-Ka-Ewa-Shee&#8221;... View Obituary & Service Information

The family of Yvonne K Cahwee created this Life Tributes page to make it easy to share your memories.

Send flowers to the Cahwee family.