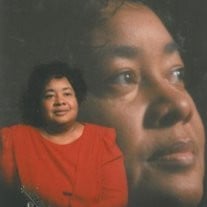 Zenobia Celestine (Ligons) Willis, daughter of James and Amelia Ligons was born on September 18, 1940 in Hoffman Oklahoma. Our Heavenly Father called her home July 14, 2013 at the age of 72 years, 9 months, and 26 days. On July 11, 1960 Zenobia was united in marriage to Johnny C. Willis, and to this union 6 children were born. Zenobia accepted the Lord in her early 20â??s, and became very strong in her faith, and embraced the truth of Godâ??s Word. She was always willing to assist others whenever she could no matter the situation. Zenobia was a devoted wife, mother and grandmother figure to many others in addition to her own children. She dearly loved her children, grand children and great grandchildren. She became known as G.G. to her grand children, and great grand children. The Lord blessed her with a gift of cooking and she became renown for her peach cobbler, gumbo, spaghetti, and sweet potato pies. She was an excellent cook, a loyal friend, and had a beautiful smile. She was a kind, loving, and a gentle person, always willing to speak about the goodness of the Lord, and how His mercy endures forever. She had unwavering faith and trust in God for her body and soul to the end. Zenobia was preceded in death by her parents, James and Amelia Ligons, her husband of 29 years, Johnny C. Willis, a step daughter Elaine Murchinson, three sisters Loretha Johnson, Juliann Stone, Izetta McCray, and two brothers Jimmy Ligons and Donald Ligons. She leaves to cherish her memory eight children: three daughters Latonya Jones, Waleah (Greg) Williams, and Wynesha Willis, all of Tulsa, OK. five sons Johnny (Carrie Mae) Willis, Tyrone Willis, and Laquan (Kormesha) Willis all of Tulsa, OK. Jimmy (Nan) Jackson of Houston, TX. And Randy (Annette) Thomas of Lawton, OK. Zenobia leave three sisters Joann Gresham of OK. Wynema (Herbert) Clay, Goletha (Anceo) Francisco, two sister-in-laws Ruth Ligons of California, and Letha Ligons of KS. She leaves two brothers, William Ligons of UT. Marcus (Mildred) Ligons of OK., and a brother-in-law Theodore McCray of KS. G.G. leaves 25 grandchildren, 38 great grandchildren, and a host of relatives, saints, and friends.

The family of Zenobia Celestine Willis created this Life Tributes page to make it easy to share your memories.