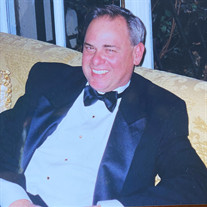 Dr. Gregory J. McWilliams, age 72, passed away March 3, 2021, a victim of COVID-19. He was preceded in death by his parents, E. Anne and Charles A. McWilliams; and his former wife Pamela Brewer McWilliams. He was born May 4th, 1948 in Holdenville, Oklahoma and moved with his parents and younger brother, Chip, to Broken Arrow, Oklahoma in 1952. Dr. McWilliams graduated from Broken Arrow High School in 1966. He then attended the University of Oklahoma as a pre-med student where he earned a bachelor’s degree in History in 1970. His interest in becoming a doctor took him to the A.T. Still College of Osteopathic Medicine in Kirksville, Missouri where he graduated in 1974. After completing his course work, residency, and board certification, Dr. McWilliams was awarded a Fellowship at the Cleveland Clinic where he trained in a relatively new subspecialty called Interventional Cardiovascular Medicine. His 44 years in medicine were anchored in Tulsa where he opened his Cardiology practice in 1980. Dr. McWilliams’ long and successful career was mainly at Saint Francis Hospital, Tulsa; but, also at Oklahoma Osteopathic Hospital and St. John’s, Broken Arrow. The last 5 years of his career he spent as a Cardiologist at Tahlequah City Hospital. Survivors include his son, Zachary Brewer McWilliams (Sara Beard); his brothers Dr. Charles A. McWilliams (Cindy) and Mr. J. Scott McWilliams, J.D., his sister Jean Ann McWilliams Foley, Ph.D. (Gary Cole), and 5 nieces and nephews, Aaron McWilliams (Elizabeth), Meredith Bollinger (John), Molly Hey (Brandon), Heidi McWilliams, and Mykaila DeLesDerenier (Matt). Besides being a treasured physician who took great pains to listen to his patients and provide excellent medical care, Dr. McWilliams had a ferocious love for life. He was constantly delving deep into classical history and searching for truth. This is notable in his faithful attendance and participation in a downtown Bible study over the past 2 years. His captivating stories, impressive escapades and travels, greathearted gatherings for family and friends will be sorely missed. His colorful and exuberant life was highlighted by a large loyal fan base who will continue to ride the crest of his wave retelling, re-living and embellishing Mac’s stories. Graveside services will be held at 2:00 p.m. on Monday, March 8, 2021 at Floral Haven Memorial Gardens, Garden of Serenity, 6500 S. 129th E. Ave, Broken Arrow, OK 74012. The family will be holding a Memorial Celebration later this year. Friends and loved ones are welcome to attend a memorial service at Gregory's home on Saturday May 22, 2021 starting at 5:00 PM. The address is 6950 S. Columbia Ave Tulsa, Ok.

Dr. Gregory J. McWilliams, age 72, passed away March 3, 2021, a victim of COVID-19. He was preceded in death by his parents, E. Anne and Charles A. McWilliams; and his former wife Pamela Brewer McWilliams. He was born May 4th, 1948 in Holdenville,... View Obituary & Service Information

The family of Dr. Gregory J. McWilliams created this Life Tributes page to make it easy to share your memories.

Send flowers to the McWilliams family.