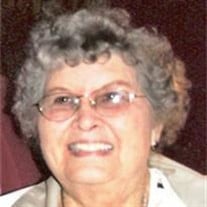 Alma Belle Henson Mahaffey Alma Belle Henson Mahaffey went to be with her Lord on August 20, 2011. Born June 10, 1924, in Imperial, Texas, she was one of eight children born to Robert Henson, and Leafy Missouri Nash Henson.Â  She went to elementary school in Stanton, Texas, and graduated from Midland High School.Â  She worked during World War II at the bomber plant in Arlington, Texas.Â  After the war, she moved to California and attended City College of Los Angeles.Â  She worked in fashion and later worked for Bell Telephone.Â  Her fatherâ??s sudden illness drew her back to Midland, Texas, where she met and married Charles Mahaffey. Â Their 62-year marriage was blessed with four sons and one daughter.Â  Alma was a committed Christian.Â  She was an active member of Park Plaza Church of Christ, taught Sunday school, participated in ladies Bible class, and touched the lives of all.Â  One of her greatest legacies is that all her children and grandchildren are Christians.Â  She was also a member of the American Sewing Guild and her hobbies were sewing and cooking.Â  She is survived by her husband, Charles, her sister, Peggy Pearson of Fort Worth, Texas,Â  Greg and Karen Mahaffey of Norman, Robert and Debbie Mahaffey of Tulsa, Jann and Walt Moore of Athens, Georgia, Steve and Virginia Mahaffey of Tulsa, and Doug and Joanne Mahaffey of Newport Beach, California.Â  They were blessed with sixteen grandchildren, three great-grandchildren and have one more on the way. Alma will be missed by her family and friends, but we praise God that she fought the good fight, kept the faith, and is now enjoying her heavenly home.Â  In lieu of flowers memorial gifts may be to the â??Mahaffey, Mansur, Owlsley Scholarship Fundâ? or to the Park Plaza Benevolent Fund: Park Plaza Church of Christ, 4930 S. Sheridan, Tulsa, Ok, 74145

The family of Alma H. Mahaffey created this Life Tributes page to make it easy to share your memories.