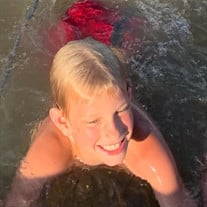 From the day that Andrew Brady Free was born, he was our Andy. It would be impossible toadequately share his exceptionality. Andy was always moving forward, wanting to grow up toosoon, always chasing his brothers’ shadows. Poor baby had to sleep in backwards onesies because he didn’t want to wear baby pajamas or diapers. He was kind and compassionate, onceeven trying to share over $1500 with his friends at school. He loved his family and tried to be alittle bit like each of them- from getting pedicures to working construction. He was brilliantly creative, especially with origami, producing videos, building elaborate Minecraft worlds, andcreating devices- even projectile launchers that he used to get himself into trouble. He was anatural athlete, running before he should have even been able to walk. He enjoyed skiing,snowboarding, wakeboarding, tubing, riding four-wheelers and dirt bikes, BMX, skating,skateboarding, ripstiking, one-wheeling, riding go-peds and segways, swimming, and running. Ifthere was a way that he could move, and have fun, he did it and he lived his life to the fullest. He was so fearless, he even once tried to “ski” behind an atv. Despite being a rough-and-tumble boy,he loved down time and he loved to spend it snuggled up with mom and dad watching movies orplaying games with the entire family. He looked up to his brothers and worked every single dayto be as good as them. He loved llamas, alpacas, his 5 dogs and his donkey. Andy was just exceptional. His eyes sparkled and his very presence would light up whole rooms. He didn’t know strangers. Everyone was a friend to him. He was the brightest light, the purest soul, and like gravity, he ruled our entire world.Andy is survived by his parents, Brett and Cassi Free; two brothers, Johnathan and Blake Free;his grandparents, Bill and Janet Free, Doug Goree, and Brian and Julie Peterson; his aunts anduncles, Jenny Siemer, Caleigh Goree, Carrandra Goree and Marshall Mechaley, and Nick Goree;his cousins, Samantha Siemer, Sebastian Balderas, Levi Sandoval, and Zale; and everyperson who was ever touched by his light. “To All Parents” by Edgar Guest "I'll lend you for a little time, a child of mine," He said."For you to love the while he lives, and mourn when he is dead.It may be six or seven years, or twenty-two or three,But will you, till I call him back, take care of him for me?He'll bring his charms to gladden you, and shall his stay be brief,You'll have his lovely memories, as solace for your grief.I cannot promise he will stay, since all from earth return,But there are lessons taught down there I want this child to learn.I've looked the wide world over in my search for teachers true,And from the throngs that crowd life's lanes, I have selected you.Now will you give him all your love, nor think the labor vain,Nor hate me when I come to call, to take him back again?”I fancied that I heard them say: "Dear Lord, Thy will be done!For all the joy Thy child shall bring, the risk of grief we'll run.We'll shelter him with tenderness; we'll love him while we may,And for happiness we've known, we’ll forever grateful stay.But shall the angels call for him, much sooner than we’ve planned,We’ll brave the bitter grief that comes, and try to understand.

From the day that Andrew Brady Free was born, he was our Andy. It would be impossible toadequately share his exceptionality. Andy was always moving forward, wanting to grow up toosoon, always chasing his brothers&#8217; shadows. Poor baby had... View Obituary & Service Information

The family of Andrew Brady Free created this Life Tributes page to make it easy to share your memories.

From the day that Andrew Brady Free was born, he was our Andy....

Send flowers to the Free family.