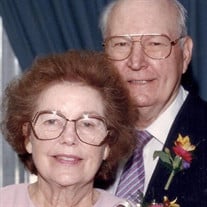 Annice Marie Flippo went to be with the Lord Feb 22nd, 2020. She was born in Cheyenne, Oklahoma on October 16, 1921 where her father was County Agent. Annice and her family lived in Pauls Valley during her grade school years and moved to Stillwater where she graduated from Stillwater High School in 1939 winning numerous awards as an officer of the Future Homemaker Club, National Honor Society, State Honor Society, and Glee Club, and according to her yearbook, her cause of death would be old age. She attended college for two years at Oklahoma State University and then moved to Norman to attend Oklahoma University upon her marriage to Murry. She was born in the roaring twenties, lived through the Great Depression, WWII and raised five children through the sixties and seventies. She was preceded in death by her husband of 60 years, Murry Flippo, her parents, James and Garnett Waldby, her brothers, Roy, Louis and Odell, her sister, Annette Roach, and her grandson, Roger Murry Flippo Jr. She is survived by her sister, Doris Anderson, of Santa Rosa, California, her five children, Joseph and Margarita Flippo of Albuquerque, John and Sandy Flippo of Claremore, Margaret Dunsmore of Apple Valley, California, Cindy and Guy Burnett of Owasso, Roger Flippo of Broken Arrow and a legacy of 18 grandchildren and 14 great grandchildren. Annice was a loving devoted wife, mother, grandmother and great grandmother. She enjoyed arts and crafts, puzzles, studying Bible prophecy and serving her church, South BA Baptist, where she was a charter member, and playing SkipBo and dominos and winning. But, mostly, she enjoyed visiting with her family and many, many friends. Funeral services will be held on Saturday, Feb 29th, 2020 at 11am at Floral Haven with a light lunch reception to follow. Viewing will be Friday, Feb 28th, 2020, 4-5pm for family and 5-8pm for the public.

Annice Marie Flippo went to be with the Lord Feb 22nd, 2020. She was born in Cheyenne, Oklahoma on October 16, 1921 where her father was County Agent. Annice and her family lived in Pauls Valley during her grade school years and moved to Stillwater... View Obituary & Service Information

The family of Annice Flippo created this Life Tributes page to make it easy to share your memories.

Send flowers to the Flippo family.