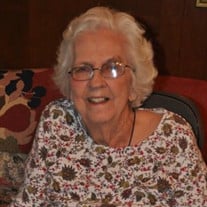 Barbara Loy Barnes, 96 of Broken Arrow, passed away peacefully with her daughter, Frances at her side on Tuesday, February 11, 2020. She was born November 28, 1923 in Arkoma, Oklahoma to Ferd W. and Rosalie (Ingle) Loy. Barbara grew up with her three brothers in Arkoma and Ft. Smith until moving to Tulsa around 1937. It was during this time that Barbara became a Christian and accepted Christ. She attended Central High School in Tulsa with her best friend Pawnee, who she stayed in touch with for many years. Barbara and Pawnee loved to go dancing at the Cains Ballroom, just like most young people during that day and time. One evening in 1942, a young man named Grover asked her to dance. They found out they only lived a block from one another and had a lot in common. They had a whirl wind romance. Before they knew it, Grover was shipping out and a short while later, she’s on a train out to meet him. They were married November 16, 1942 in Gulfport, Mississippi. After the war was over, Grover, Barbara and 2-year old Mike settled in their first home in Tulsa. It was in White City Housing Addition near 4th and Yale. It was there that they joined White City Baptist Church and met a very special group of friends in the Young Married Department. They soon called themselves “the group” and embarked on a 60-year journey of Friendship and loads of Fun!! They had fun SS parties and even went on a few short trips together. They also went to the lake nearly every Saturday, but were always in Church by Sunday morning. In their later years, they had monthly dinners where they retreated afterwards to the hostess’ house for the girls to laugh and talk in one room and the boys to play cards in the other room! Out of a core of six couples, only one precious lady is alive. Barbara was a homemaker all of her married life. She enjoyed taking care of her home and helping raise their children. After Grover retired in 1981, they enjoyed many years taking their motorhome to places like Branson, Nashville and Arizona. Barbara loved her family very much, along with her extended family. She was very proud of her Loy and Ingle family Heritage and loved to research her Ancestry. She loved meeting new cousins and visiting with them about the family and exchanging information. Barbara was preceded in death by her parents and her three brothers, Alfred Loy, Calvin Loy and Myron Loy. She was also preceded in death by several grandchildren, her granddaughter, Michelle Barnes Stelzig; her Great Grandson, Austin Loy Barnes; and her Granddaughters, Barbara Lea, Rachel and Susan, Ellen Marie and Sarah Frances Rothhammer. She is survived by her three children, Mike Barnes and his wife Judy of Lindsay, Oklahoma; Frances Rothhammer and her husband Chester of Broken Arrow, OK; and Barbara Ellen Morgan and her husband Tracy of Stillwater. Also, she’s survived by her Grandchildren Greg Barnes and his wife Tammie, of Lindsay, OK; Josh Rothhammer of Tulsa, OK; Amy Rothhammer-Stipe and husband Dan of Plano, TX; Sara Beth Ford and husband Jordan of Springfield, MO; Matthew Morgan and Wife Erin; and Travis Morgan of Stillwater. Then she had Six Great Grandchildren, Zach Barnes of Chicago, IL; Blake Barnes, of Morgantown, WV; Trever Stelzig of Stillwater,OK; Tyler Stelzig of Stillwater, OK; Tara Stelzig of Lindsay, OK and Oliver Ford of Springfield, MO As Aunt Barbara, she was loved by her nieces Rhonda Hooper, Boo Pyle and Donna Barnes and her nephew Bill Barnes. There will be a Visitation on Sunday, 2/16/2020 from 4:00 to 7:00 PM. A funeral service will be held to celebrate Barbara’s life at 12:30 on Monday, February 17, 2020 at Floral Haven Chapel, with Interment to follow at Floral Haven Cemetery. In Lieu of flowers, donations may be made in Honor of Grover and Barbara Barnes to the American Cancer Foundation. www. Cancer.org

Barbara Loy Barnes, 96 of Broken Arrow, passed away peacefully with her daughter, Frances at her side on Tuesday, February 11, 2020. She was born November 28, 1923 in Arkoma, Oklahoma to Ferd W. and Rosalie (Ingle) Loy. Barbara grew up with... View Obituary & Service Information

The family of Barbara Barnes created this Life Tributes page to make it easy to share your memories.

Send flowers to the Barnes family.