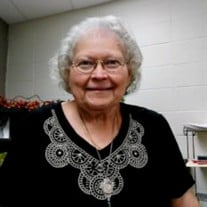 Barbara Ruth Davis, 79 years of age, received her angel wings and made her heavenly flight with family by her side on September 13, 2019. Barbara was born in Checotah Oklahoma June 17, 1940 to Marie Livingston and Charlie C. Porter. She grew up with her brothers Pike, AJ and Ed. She attended East Central high school and was a graduate of the Class of 1959. On March 28, 1959 while attending a dance at the American Legion she met the love of her life Theodore Edward Davis. They danced two dances and in those two dances knew all there was to know about the other. Ted wasted no time and two weeks later on April 11, 1959 promptly ask Barbara to “go steady”. Barb had to think about it for the night but she called him the next day and they began “going steady”. Shortly after, on April 24, 1959 Ted ask Barbara to marry him and she accepted. They were married on June 23, 1959 in Muskogee Oklahoma. Their love affair spanned 36 years – and included the birth of their two children Theodora Elaine, Burt David and grandson Phillip Shelley. Barbara was an avid aviation fan and supported her husband Ted as he worked towards his dream of becoming a licensed pilot. They moved several times in the course of his career however returned to Tulsa and made it home. Barbara worked outside the home at Sears Surplus as well as at Oiler Stadium way back in the day. She loved her children without exception and her family was the most important job to her. She took great pride in giving them her love support and guidance. In later years she strongly supported Phillip and his love for golf. They created many happy memories and moments attending golf tournaments fundraisers and school events. She loved to watch her son’s race their Micro Sprint and Sprint cars and attended every race she could. She was their number one fan. As an EC Alumni she loved her school. She became a substitute teacher subbing for the Exception Student class room. She loved the kids and they loved her. She worked many sports events and supported the EC Boosters tirelessly as Game Manager. She planned all of the EC Alumni golf tournament lobbying for vendor support and prizes for the event. She wanted to make each tournament fun and memorable for her EC alumni family. She had many close friends by her side during this last part of her life journey – you know who you are. Those friends have been the wind beneath her wings. Barbara was preceded in death by her mother Marie Livingston Porter, father Charlie C.Porter, brothers AJ and Pike Fulsom and Ed Allphin, and husbandTheodore Edward Davis. She is survived by her children Elaine Davis of Tulsa, Burt and daughter-in-law Regina of Tulsa, grandson Phillip of Tulsa, and all her EC Family.Visitation will take place from 5 pm – 8 pm on Tuesday, September 17 at Floral Haven Funeral Home.Services will be at 3 pm on Wednesday, September 18 at the Floral Haven Chapel.Reception to follow.

Barbara Ruth Davis, 79 years of age, received her angel wings and made her heavenly flight with family by her side on September 13, 2019. Barbara was born in Checotah Oklahoma June 17, 1940 to Marie Livingston and Charlie C. Porter. She grew... View Obituary & Service Information

The family of Barbara Davis created this Life Tributes page to make it easy to share your memories.