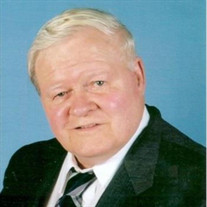 Bennie Charles Rhoads, 82, loving and devoted husband, father, grandfather and friend passed away peacefully at his home on Saturday, November 22, 2020. Ben was born on December 22, 1937 to Beno and Jewel Rhoads in Fort Worth, TX and was the oldest of 6 children. In 1954, at the age of 17, he enlisted into the United States Navy where he began his military career. He served our great country for 20 years during the Vietnam War, and was assigned to a patrol squadron flying all over the world. He retired with honor to civilian life in 1974 and began his second career as a facilities manager in the aviation industry. He worked many years for Pratt and Whitney, in Springdale, AR as well as The Nordam Group in Tulsa before retiring for the second time in 2002. Ben had a great love of camping, fishing and restoring antique radios but most of all he loved spending time with his children, grandchildren and great grandchildren. He was always up for an adventure whether it was taking a road trip to somewhere fun or just playing army men on the living room floor with the great grandkids. He was greatly loved and will be missed by all. Ben is survived by his wife of 64 years, Sue Rhoads; three sons, Ben D. Rhoads and wife Nancy of Broken Arrow, Mark S. Rhoads and William G. Rhoads both of Tulsa. His grandchildren, Mark Charles, Sean and Christopher Rhoads, honorary granddaughter Rebba Rhoads and great grandchildren, Dominic and Maverick Rhoads; adopted daughter Linda Roberts and husband Danny of Northport, AL; sister, Merle Worden, brother-in-law, Roger Grayson, special nieces Tammy Nelson and Dawn Collins and numerous great nieces and nephews. Visitation will be Monday, November 30, 2020 from 12 -6PM at Floral Haven. A memorial service will be held at 3 PM Tuesday, December 1 at Floral Haven Memorial Gardens Chapel in Broken Arrow. In lieu of flowers, donations can be made in his honor to the Disabled American Veterans. Webcasting will be available at the following link: http://webcast.funeralvue.com/events/viewer/41486/hash:FC242CB579BEC156

Bennie Charles Rhoads, 82, loving and devoted husband, father, grandfather and friend passed away peacefully at his home on Saturday, November 22, 2020. Ben was born on December 22, 1937 to Beno and Jewel Rhoads in Fort Worth, TX and was the... View Obituary & Service Information

The family of Bennie Rhoads created this Life Tributes page to make it easy to share your memories.

Send flowers to the Rhoads family.