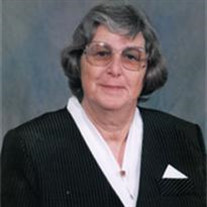 Funeral services and Christian Burial for Betty Marijean Postlewait Morrison, 79, a resident of Tulsa, will be held at 11:00 AM, Friday, November 2, 2012 at The Church of Jesus Christ of LDS, 1701 N. Hickory Place, Broken Arrow, Oklahoma. Â Burial will be at Floral Haven Cemetery, 6500 South 129th East AvenueÂ Â Broken Arrow, OK 74012.Â A reception for family and friends will be held after the burial at The Church of Jesus Christ of LDS. Betty passed away peacefully on Saturday, October 27, 2012 at St. John’s Hospital in Tulsa after many years of declining health.Â During her life, she lived in Bartlesville, OK, Oglesby, OK, Nowata, OK, Tulsa, OK. Betty was born on March 27, 1933 in Gridley, Kansas,Â the daughter of Emery and Margaret Dewey. Â She was baptized on December 30, 1951 at the Central States Mission in Bartlesville, OK.Â She was united in marriage to Glen Cecil Postlewait on February 15, 1952 in Chanute, KS. Â Glen preceded her in death October 4, 1979. Â Â She was united in marriage to Jess Morrison on November 28, 1987 and they made their home in Nowata, OK.Â Jess preceded her in death several years later. Betty was a selfless person, she was always quick to help others.Â She loved her family and friends as well as animals of all kinds.Â She was a published poet and active in the local Mormon Church and Moose Lodge of Bartlesville. She is survived by her children; Jeanie May Moon of Tulsa, OK, Robert Glen Postlewait of Broken Arrow, OK; one step-daughter, Becky Postlewait Bobo, 4 loving grandchildren; Sean B. Moon, Kerrie Postlewait Clem, Keelan Postlewait, Alan Ferguson; 2 brothers, Tom Dewey of Wichita, KS, Wes Dewey of Chanute, KS, one son in law, Jeff Moon of Tulsa, OK, one sister in law, Joyce Dewey of Dell City, OK.Â Her third brother and step-daughter, Joyce Dewey of Dell City, OK and Becky Postlewait Bobo of Bartlesville, preceded her in death at earlier dates. In lieu of flowers, memorial donations may be made to the Church of Jesus Christ of LDS, 1701 N. Hickory Place, Broken Arrow, OklahomaÂ 74012.

The family of Betty Postlewait Morrison created this Life Tributes page to make it easy to share your memories.