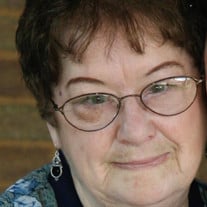 Betty Parson passed from this life on Monday, July 13, 2020 at the age of 82. She will be remembered as a strong woman who thought of others before herself; she gave and sacrificed incredibly much for those she loved. She showed she cared by giving gifts, whether it was a portion of the casserole or cake she made or even just a small trinket she bought at the store. She also gave her time; she was known to get on the floor even in her 50s and play Barbies for hours with the granddaughter whom she raised. She was a social butterfly who loved to joke and tease and would always get a twinkle in her eye when she said something she knew was outrageous. She loved to crochet and sew; most of her life she could be found in her sewing room making clothes, quilts, afghans, and doll clothes. She loved Mexican food, and every time she went out shopping she’d say, “Let’s get some tacos!” She enjoyed The Three Stooges and I Love Lucy; though as a huge Bruce Willis fan, she was just as likely to be found watching one of the Die Hard movies. She also loved her Southern Gospel music; it was always playing in the background when you spoke with her on the phone. Betty was a force to be reckoned with, and despite the messy turns that life threw at her, she never gave up the faith. She lived her life as a true shield, always protecting and caring for those she loved. She will be dearly missed, but her legacy and memory will live on in the hearts and lives of those she touched. She was preceded in death by her parents, John Franklin and Garnett Hazel Flud; daughter, Tonya and eight siblings. Survivors include her daughter, Terry Burbank; sons, Timothy and Tracy Flud; grandchildren, Tonya, Ramon, Bobby, William and Terri; five great grandchildren; sisters, Patricia Jones and Verona Burns; brother, John Charles Flud and numerous other relatives.

Betty Parson passed from this life on Monday, July 13, 2020 at the age of 82. She will be remembered as a strong woman who thought of others before herself; she gave and sacrificed incredibly much for those she loved. She showed she cared by... View Obituary & Service Information

The family of Betty Parson created this Life Tributes page to make it easy to share your memories.

Send flowers to the Parson family.