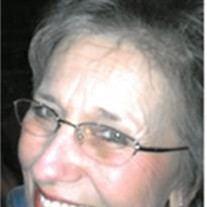 Beverly Jean Burkett Peterson passed on to Heaven at the age of 63 on Saturday, June 23, 2012 at 11:23am.Â  A battle with Acute Myeloid Leukemia caused her death.Â  She was a resident of Broken Arrow, Oklahoma. Beverly was born in Tulsa, Oklahoma on August 26, 1948.Â  Her parents were Geneva and Harold Burkett.Â  She had one older brother, Richard.Â  Beverly was a graduate of Central High School in Tulsa.Â  Upon graduation she attended Business School and later in life received an Associateâ??s Degree in Accounting.Â  She spent much of her life in various accounting roles and office positions before and after being a stay at home mom.Â  She lived predominately in the Tulsa area but did live in McAlester for nine years.Â  She moved to Broken Arrow in 2006 where she remained until her death. Beverly was a woman of faith.Â  She accepted Christ in 1977.Â  Beverly considered her greatest achievements to be her three children and five grandchildren.Â  Family was of upmost importance to her. Â This included special friends.Â  Her philosophy was always the â??more the merrierâ?.Â  It was better to have her loved ones with her and people sleeping on the floor than to have a pristine setting and few people around.Â  Her love for family and others was a picture of the loyalty she exhibited.Â  Strength was one of Beverlyâ??s most apparent attributes.Â  She fought her battle with cancer with the same strength and determination she used to guide her children in the way of the Lord, deal with adversity that was brought her over the years and the boldness to go back and get an associateâ??s degree in her 50â??s.Â  From having honey bees in a bedroom wall to having Leukemia she faced it with great strength and determination, the Lord blessed her, with always remembering â??this too shall pass.â? Beverly will be missed for many reasons.Â  However, her dependability, love for simplicity, willingness to encourage and her strength and determination will be a significant loss for all those who knew and loved her. Beverly is survived by her three children.Â  They are Angie and Eric Peterson of Olathe, Kansas, Carrie and Chad Smith of Tulsa and Ashley Peterson of Tulsa.Â  She had five grandchildren:Â  Jonathan Peterson, Caleb Peterson, Seth Peterson, Megan Smith and Carson Smith.Â  Beverly is survived by a sister-in-law, Gloria Burkett, many cousins, nieces and nephews.Â  She had three very special friends, Mark Pimsler of Broken Arrow, Dodie Newman of Sapulpa and Alice Kopenheimer of McAlester.Â  Beverly is preceded in death by her parents, Geneva and Harold Burkett as well as her brother, Richard Burkett. A Memorial Service will be held in Beverlyâ??s honor on Wednesday, June 27th, at 10a.m.Â  Reverend Jim Burkett, Beverlyâ??s cousin, will be officiating.Â  Pallbearers are Eric Peterson, Jonathan Peterson, Caleb Peterson, Seth Peterson, Chad Smith and Carson Smith.Â  There will be a viewing at Floral Haven Funeral Home on Tuesday, June 26th from 6-8pm.Â  There will be a reception immediately following the service at the Floral Haven Family Center.

Beverly Jean Burkett Peterson passed on to Heaven at the age of 63 on Saturday, June 23, 2012 at 11:23am.Â  A battle with Acute Myeloid Leukemia caused her death.Â  She was a resident of Broken Arrow, Oklahoma. Beverly was born in Tulsa, Oklahoma... View Obituary & Service Information

The family of Beverly Jean Peterson created this Life Tributes page to make it easy to share your memories.

Beverly Jean Burkett Peterson passed on to Heaven at the age...