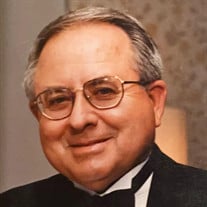 Billy (Bill) Evertt Bryan, age 81, passed away on September 27, 2021. Bill was a Christian man who now enjoys the rest and peace of Paradise. Bill was born in Hockerville, OK and went to Quapaw schools where he was a football and track star. Following graduation, Bill served in the United States Navy, including duty at Naval Station Guantanamo Bay Cuba during the Cuban Missile Crisis. Upon his return from military service, Bill attended Northeastern Oklahoma A&M College and ran track. Bill enjoyed a successful career in business, including work at The Williams Companies, Inc. and APAC. Bill was blessed with 40 years of marriage to Judy Bryan. They enjoyed many trips and adventures with family and their Pacesetters group during their time together. Bill and Judy had three children, Tom, LeAnn and Cassie, and nine grandchildren who adored their Poppa and Mimi. After Judy’s passing in 2002, Bill enjoyed the additional blessing of 15 years of marriage to Carol Bryan and the addition of Carol’s children to his family. Carol was a faithful companion to Bill. Bill was a soft-spoken man, but his devotion to and love for his family were understood loud and clear. He cherished family gatherings and trips (especially his annual golf trips with his brother, son and nephews). He was beloved by his grandchildren for his sweet spirit and for the sweets in his pocket! Bill was preceded in death by his wife, Judy Bryan, parents, Finis and Jewel Bryan, sister, Shirley Bryan Maxton, and brother, Jack Bryan. He is survived by his wife, Carol Bryan; brother and sister-in-law, Donnie and Sue Ann Bryan; son and daughter-in-law, Tom and Shelly Bryan; daughter and son-in-law, LeAnn and Dale Killion; daughter and son-in-law, Cassie and Eric Smith; step-daughter and son-in-law Nanci and Mike Egermeier; step-daughter and son-in-law Janis and Jeff Todd; grandchildren, Kyle, Kelsey, Michelle, Kristen, Katie, Karsen, Parker, Harrison and Carter; five great-grandchildren and numerous family members and cherished friends. Visitation will be held from 3-6 p.m. on Thursday, September 30, 2021 at Floral Haven Funeral Home. Funeral service will be at 10 a.m. on Friday, October 1, 2021 at Floral Haven Funeral Home Chapel. Burial will follow at Floral Haven Memorial Gardens. ***Services will be live streamed starting at 9:55 AM on Friday, October 1, 2021. To view the service live, please click on the following link: http://webcast.funeralvue.com/events/viewer/61305 Friends who wish to honor Bill’s memory may make contributions to John 3:16 Mission, Salvation Army or Day Center for the Homeless.

Billy (Bill) Evertt Bryan, age 81, passed away on September 27, 2021. Bill was a Christian man who now enjoys the rest and peace of Paradise. Bill was born in Hockerville, OK and went to Quapaw schools where he was a football and track star.... View Obituary & Service Information

The family of Billy "Bill" Bryan created this Life Tributes page to make it easy to share your memories.

Send flowers to the Bryan family.