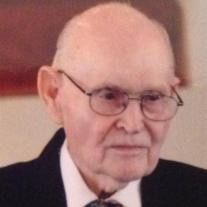 Rev Oral T Wynn was born to Dirley Preston and Mary Florence Wynn on May 27, 1922 in Big Flat Arkansas. “Bro Wynn” went to be with his wife Jewell in heaven on Dec 29, 2012 at the age of 90 years old. He served his country in World War 2 in the 932nd Field Artillery from Nov 1942 â?? Dec 1945. His unit fought in North Africa, Italy, France, Belgium, Austria, and Germany. He was attached to the 5th Army from North Africa to France. When he reached Germany his unit was attached to Pattonâ??s 3rd Army and made the final push into Austria to end the war. Upon returning to the states, he moved to Tulsa where he met the â??Love of his lifeâ?, Jewell, and married her June 28, 1947. A few years later he was saved in his West Tulsa home. He soon accepted his calling into the ministry and began to pastor. He was a minister of the gospel for 58 years. He loved to tell stories. He loved Dr. Pepper. He loved to trade cars. He loved to work on his house. He was a carpenter, cabinet maker, church remodeler and builder. He was a great husband and father. He loved his family with everything he had, but most of all he had such a great and wonderful love for his Lord and Savior. He read his bible every day and read cover to cover each year. Since May when Jewell passed away, we believe he read the bible through 3 times.He was known by most as Bro. Wynn. His life as a pastor took him and his family to many towns and churches. The 1st church they pastored was Summit Arkansas. Then they pastored in the state of Oklahoma in the Church of God of Prophecy until they retired. They pastored in Leach, Altus, Guthrie, Edmond, Beggs, Tulsa Springdale, Tulsa Verndale and Tulsa Dawson.Truman was preceded in death by his wife Jewell on May 22, 2012. He is survived by his daughters, Karen Harris of Sand Springs, Mary Beesley of Beggs, his sons, Owen Wynn of Yukon, James Wynn of Moore, Steve Wynn of Mount Pleasant, TX, his son-in-laws, Joseph Harris, Bill Beesley, daughter-in-laws Becky Wynn, and Sandi Wynn. He is survived by 15 Grandchildren, 10 Great Grandchildren, and 2 Great, Great Grandchildren, brothers-in-law and sister-in-laws Harvey and Linda Hudson, and Tommy and Judy Hudson, his sisters and brothers-in-laws, Doris and Rev. Charles Craig, Shirley and Rev. Fred Beesley, brother Dirley and sister-in-law Ruby Wynn and several nieces, nephews and cousins.He was preceded in death by his mother, Mary Florence Wynn, father, Bob Wynn, sisters Alice Oshia, Nadine Downs, Oris Hinkey, Pauline Wynn, and his brothers, Richard Wynn, TJ Wynn, Dale Wynn, Orell Wynn, Gene Wynn, and Naiman Wynn. His mother-in-law Rhetta Williams Hudson and Father-in-law, Jim Hudson, Sisters-in-law, Linda Dunn, Mary Evelyn Pittman, Kathryn Hess, brother-in-law Jimmy Hudson, and daughter-in-law Brenda Wynn. If he met you, he loved you, if you met him, you loved him. More than anything he wanted to be like Jesusâ?¦â?¦.Jesus must be a little ornery.

The family of Bishop Oral Truman Wynn created this Life Tributes page to make it easy to share your memories.