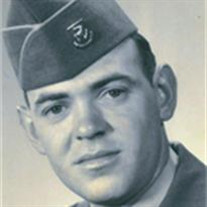 Bobby Ray Dodwell (September 19, 1934 – July 15, 2012) Bobby (Bob) Ray Dodwell went to be with his Lord and Savior on July 15, 2012 in Fayetteville, Arkansas. He was born in Caddo Valley Arkansas on September 19, 1934. Bob went to school in Smithton, Arkansas until the 8th grade and later went on to earn his GED in the Army in 1955. Bob served in the U.S. Army from September 1954 until August 1956. Bob was stationed in Germany and was the driver of one of the tanks because he was the one of the smallest soldiers in that unit. Bob worked at Allied Signal for many years after the service. He played a steel and regular guitar in a band. Bob was a devoted member of the ADCO Kiwanis. Bob was an active member for the Stilwell Public Library Friends Society. Bob was a member of the New Life Church and attended Rhema Bible College in Broken Arrow, Oklahoma. Bob loved fishing, listening to gospel and Country/Western music, playing cards and playing dominos with his beloved wife Fay. Bob was on the Intercessory and Prayer ministry Team, COTTA (Community Organization Technical Training Assistance). Bob was also known by many of the local Kiwanis Children as “Cowboy Bob”. He was also a member of Chamber of Commerce. Bob and Fay Dodwell placed in the top 10 of the “Bell Ringers”, and also attended Disaster Training for the Salvation Army. Bobby was preceded in death by his mother- Nettie Eunice Meeks, Father- Carley Clyde Dodwell, Brothers- Leonard Clyde, Alton Doyle, Melvin Otis, Dorothy Mae O’Hart, Lloyd Leroy, Tommy Howard, and his Baby sister whose name is unknown. Bobby is survived by his wife Doris Fay Dodwell, son Anthony Ray, daughter Nita Ann, and his adopted daughter Kelly Roberts. Sister Lorene Williams of Hot Springs, sister Sylvia Jean Thomas and husband Joe of Garland Texas, and brother L.T. of Arkadelphia, Arkansas. Bobby Dodwell’s Celebration of Life Service will be Friday July 20, 2012 at 12:30 pm at Floral Haven in Broken Arrow, Oklahoma with Pastor max Ford and Pastor Charles Crozier officiating. In lieu of flowers donations can be made towards funeral expenses.

The family of Bobby Ray Dodwell created this Life Tributes page to make it easy to share your memories.