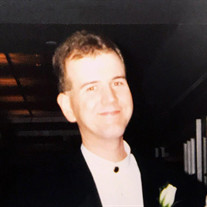 Brian Kent Holcomb entered this earthly world on November 5, 1970 and departed from it on January 8, 2021. Kent, as he was known by most people, was a sensitive soul that loved deeply those who knew him well. Born in Tulsa, Oklahoma to James and Elnora Holcomb, Kent lived the first half of his life in Tulsa and the remainder in Broken Arrow. Kent went to Tulsa Public Schools graduating from Nathan Hale High School in 1989. He then pursued a degree in Mechanical Design Engineering from Oklahoma State University. Kent was employed at Flight Safety International for 25 years as an Engineer for the Systems Software Division. Throughout the course of his life, Kent was a member of Skelly Drive Baptist Church and took great joy in his love of the Lord and enjoyed his church family over the years. In his youth, he could be found there most Sunday mornings, evenings, and Wednesday evenings or any event in which the youth group planned. Kent’s circle of friends was extremely important to him and if he considered you a friend, you had him for life. As a child, he could often be found playing with his friends at the creek, collecting comics, or playing games of strategy or chance. He was one of 13 cousins on his mother’s side. They often found time to spend together, in Arkansas. Sleep overs, bikes, running around the orchard, and looking for trouble in the holler. Kent was a member of Clark Theater where he watched in awe as his friends pursued their dreams in acting, singing, and dancing. In a more reserved way, Kent participated in the theater by building sets and assisting in the behind-the-scenes role of their many productions. Kent married his wife Andrea Patterson Holcomb in 2003 after an 8-year courtship. They did not have children but celebrated their fur babies, Fredo & Coco, just as if they were children. Kent & Andrea shared a love of music, pinball, darts, and anything competitive. Kent took great pleasure in beating her at games of skill, scaring her when she least expected it, and making her laugh. Kent is survived by his wife Andrea Patterson Holcomb and his parents James O. and Elnora J. Holcomb all of Broken Arrow. Also, his sister Deborah Brown and her husband William of Castroville, Texas; nephew Bryan Thompson and wife Melissa of Gaston, Indiana; niece Rebecca Watts, her husband Joseph, and their three children, also of Castroville, Texas. The service will be webcast: http://webcast.funeralvue.com/events/viewer/45189

Brian Kent Holcomb entered this earthly world on November 5, 1970 and departed from it on January 8, 2021. Kent, as he was known by most people, was a sensitive soul that loved deeply those who knew him well. Born in Tulsa, Oklahoma to James... View Obituary & Service Information

The family of Brian Kent Holcomb created this Life Tributes page to make it easy to share your memories.

Send flowers to the Holcomb family.