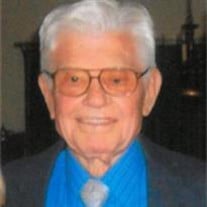 BUEFORD BARTON Â  Bueford E. Barton, also known as â??Bobâ?, â??Dadâ? and â??Pappaâ? was everything to everyone!Â Â Yes, he was a devoted husband and father, but he was also a loyal friend and strong Christian.Â He was a person who could be trusted and relied upon.Â You always heard that Will Rogers never met a man he didnâ??t like; Bob never met a person who didnâ??t like him.Â He made friends wherever he went and those friendships lasted throughout his lifetime.Â Â He was truly loved. Â  Bob was born in Abilene, Texas.Â He met his wife, Billie Louise Barton, while serving in the military during WWII.Â Â  They married and had 62 years of true happiness.Â Together they raised 3 children, Ricci, Bobby and Libbi.Â Ricci and his spouse Jacki as well as Libbi and her husband Tom reside in Tulsa.Â Bobby and his wife Pam live in Brookville, Indiana.Â Bob is survived by 6 grandchildren, DeAnne, Kyle, Miles, Austin, Alexi, and Jesse as well as 6 great grandchildren.Â He was preceded in death by two grandchildren, Lori Barton and Infant Barton.Â Â Â  Â  After he completed his military service, Bob began taking classes and working in construction until he earned a degree in civil engineering.Â His career included overseeing the construction of many dams and roadways.Â Although his line of work caused he and his family to be transferred to new locations often, he and Billie somehow made the transitions go smoothly.Â Their family settled into the new communities and soon made new friends and felt at home.Â Â  To this day, they still have friends all over the country who keep in touch. Â  As a family man and father, Bob gave his family all they needed and more.Â He and Billie taught their kids to love others.Â They taught the kids to camp, hunt, fish, ride horses, play sports, and waterski.Â He loved to be outdoors.Â He enjoyed camping at the lake and waking up early to take the kids waterskiing while the lake was smooth as glass.Â Then back at the campsite he and Billie would cook eggs and fry potatoes over an open fire.Â He couldnâ??t have been happier. Â  After he retired, he and Billie settled down in Tulsa.Â Even though he was retired, he stayed busy.Â He was always fixing something around the house, working in the yard or buying cars to work on and sell.Â He used to work on Billieâ??s car, but she finally told him â??if it isnâ??t broken, donâ??t fix it.â?Â He had an energy about him that just didnâ??t let him sit still.Â When he did sit in his recliner, he fell asleep usually watching football. Â  Bob lost Billie in 2007.Â They were so fortunate to have each other all of those years. Â  Billie wrote in her wedding journal: Â  â??As we are, Weâ??ll always be, For love was meant, For Bob and me.â? Â  Now Bob will be reunited with Billie and for that we can be thankful.Â  We have many wonderful memories of Bob.Â Â  Â  Yes, he was a good man.Â The BEST!Â He will be missed but he wonâ??t be forgotten.

BUEFORD BARTON Â  Bueford E. Barton, also known as â??Bobâ?, â??Dadâ? and â??Pappaâ? was everything to everyone!Â Â Yes, he was a devoted husband and father, but he was also a loyal friend and strong Christian.Â He was a person who could... View Obituary & Service Information

The family of Bueford E. Barton created this Life Tributes page to make it easy to share your memories.