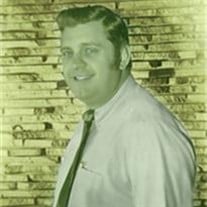 Carlton E. Horner, Sr. was born November 3, 1927 in Nashville, TN, to Carlton and Sadie Horner. He was preceded in death by his parents and sister, Virginia Lee Horner, granddaughter, Michelle Patton and son in law, Jeremey DeRocher. Carlton moved to Evansville, IN, at an early age with his family. He joined the U.S. Navy in 1944 and was discharged as a Signalman Second Class in 1946. Carlton was at Okinawa at the end of World War II and was preparing for the invasion of Japan when the war ended. He participated in the occupation of Japan and Korea. Late in 1945 and early 1946, he assisted in transporting Chinese Nationalist Troops from Shanghai to Manchuria when fighting broke out between the Chinese Nationalists and the Communists. Carlton was discharged in 1946 at the age of 18 and returned to Nashville. He graduated from North High School in Nashville in 1948 and then returned to Evansville and was hired at Chrysler Corporation. Carlton’s entire life was spent as a Union Representative, except for the Korean War. He was serving in the Navy Reserve at Evansville when the Korean War broke out in 1950. Carlton was immediately recalled to active duty in 1950. Upon being discharged in 1952, Carlton returned to his job at Chrysler Corporation. He was elected as UAW Union Representative in UAW Local 705. He served Local 705 as a Chief Steward, Recording Secretary, Vice-President and President. During the next 40 years Carlton served continuously as a Union Representative until his retirement in 1992. While serving as President of Local 705 in Evansville, Chrysler closed the Evansville plant and moved to a newly constructed plant in St. Louis County, MO. Carlton and more than 2,000 UAW members transferred to the new facility in St. Louis in 1959. Carlton was elected President of UAW Local 136 at St. Louis in 1959. In 1962, Carlton was appointed as an UAW International Representative. During his lifetime Carlton was very active in civic and political affairs. While in Evansville, he was elected President of Evansville CIO Council and as President of Greater Evansville AFL-CIO Central Labor Council. It was at this time Carlton was very instrumental in initiating a mass immunization program of the Salk Polio Vaccine in the public schools. He was also very active in electing Senator Vance Hartke to the U.S. Senate. He was an Executive Board Member of Indiana State CIO-PAC. He also served as a member of Indiana Blue Cross-Blue Shield Advisory Committee and as a Board Member of Evansville Community Chest. As a Board Member of the Evansville Community Chest, Carlton served as co-chairman of its’ Industrial Division Fund Raiser. Upon moving to St. Louis with Chrysler, he was elected President of UAW St. Louis Area CAP Council representing 30,000 UAW members in the St. Louis area. In 1962 Carlton was appointed to the International UAW staff by Walter Reuther, UAW President. In 1963 Carlton worked in Oklahoma and was very successful in the fight to help defeat the so called Right To Work in 1964. Also in 1964, Carlton worked in political campaigns in helping to elect Congressman Carl Albert. During the next 30 years he served as a Service Representative, Organizer and Citizenship Education Representative. Carlton distinguished himself in several major organizing campaigns including organizing the George C. Marshall Space Center to New Orleans, Louisiana NASA’s Saturn Rockets used on our moon shots. Carlton also organized several GM plants in the South during the 1970’s in the states of Georgia, Alabama, Mississippi, Louisiana and the GM plant in Oklahoma City, OK. Carlton was promoted to be National Coordinator in the UAW’s National Organizing Department located in Detroit, MI. While located in Detroit, Carlton attended Wayne State University in Detroit and Central Michigan University at Mt. Pleasant. He received his Bachelor Degree from Central Michigan in 1987. In 1985, Carlton took an educational trip of 37 days to the Soviet Union. He traveled more than 6,000 miles in the Soviet Union, from St. Petersburg in the North to Baku, Azerbercan in the South, including seminars at Moscow University. Among his several UAW Awards, he was most proud of receiving the UAW Walter P. Reuther Distinguished Service Award prior to his retirement in 1992. Carlton leaves behind nine children, Linda Patton, Brenda Watkins and husband L.V. Watkins, Carlton Horner, Jr., Brenda Burd and husband Herman, Deborah Sherman-Naholoholo and husband Maurice, Theresa McKee and husband Jeff, Carla Stankich and husband Robb, Stephanie DeRocher, and stepson Rickie Brown; 12 grandchildren, numerous great grandchildren and 1 great great grandchild. Carlton will be greatly missed. A funeral service will be held on Wednesday, October 6, 2010, 12:30 PM, Floral Haven Funeral Home Chapel in Broken Arrow, OK.

The family of Carlton E. Horner, Sr. created this Life Tributes page to make it easy to share your memories.