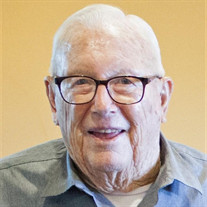 Dale LaValley passed away on Saturday, April 11, 2020, surrounded by his family. He was 88 years old. Due to the national health crisis a celebration of life will be held at a later date. Clarence Dale LaValley was born October 29, 1931 to Homer O LaValley and Edna (Centell) LaValley in Holdenville, OK. He spent his childhood with his best friend, Bob Eckles, hunting, trapping and fishing in the Holdenville area. He generated a good income selling fox, rabbit and raccoon hides during his school years. After graduating from Holdenville High School in 1948, he attended East Central University in Ada, Oklahoma and graduated with a degree in Elemen-tary Education. Later, he received a master’s in education from Tulsa University and had 30 hours towards his doctorate in Elementary Education. On September 1, 1953, he married his high school sweetheart, Ralonda Jo Cook, in Holdenville. It is a testament to their great love for each other that he got married on the opening day of dove season. The couple moved to Tulsa where he worked as a science teacher at Bryant Elemen-tary School and ultimately became principal also at Bryant. He retired from the Tulsa School system with over 30 years of service. Dale was an inspiration and role model to thousands of students and many, many teachers over his 30 years in the Tulsa Public Schools investing most of those years into Bryant Elementary and the Dawson community. He loved and cared for the teachers, young students and their families. He remembered every student by name long after they were his students. Dale was an avid hunter, fisherman, and outdoorsman all of his life. Many days were spent on the Verdigris Navigation channel hauling in catfish well over 50 lbs. In their retirement years, he and Jo traveled yearly to Iowa to bird hunt. He loved music and played trumpet in the marching band in high school, but he loved bluegrass the best. Many a week were spent in their mo-torhome at Bluegrass Festivals all over Oklahoma and Arkansas. In his spare time, he raised a huge garden with some of the largest tomatoes and sweetest corn anybody had ever seen. No-body loved a good story better than he did and nobody could tell a good story better than he could. He was a practical jokester and it made his day when he could “pull off a good one” on someone. Dale was a Mason for 54 years. He was a long-time member of the Sheridan Road Baptist Church and the Belview Baptist Church. And last, but most certainly not least, he was an avid Oklahoma Sooners fan. Woe be the person who tried to schedule something when an OU football game was on. He is survived by his wife of 66 years, Jo; his son, Jimmy (Kristie) of Cedaredge, CO; his daughters, Debbie Jo (Michael) Berrier of Centennial, CO; and Kay (Scott) Pryer of Tulsa; 7 grandchildren: Brandon (Cori) LaValley, Sean (Tijana) LaValley, Clint (Bethany) Spencer, Jessi-ca (Jeff) Taylor, Nick (Dystaney) Nordberg, Julie (Austin) Chadwick, Brent (Michelle) Pryer, and 17 great grandchildren. He was preceded in death by his parents, Homer and Edna LaValley. Our family would particularly like to thank the staff of Aberdeen Heights Assisted Living for the wonderful care and compassion they have shown to both our Dad and Mom. They have been just remarkable. In lieu of flowers, the family has requested donations be made to Belview Baptist Church, 1040 N Yale Ave, Tulsa, OK 74115

Dale LaValley passed away on Saturday, April 11, 2020, surrounded by his family. He was 88 years old. Due to the national health crisis a celebration of life will be held at a later date. Clarence Dale LaValley was born October 29, 1931... View Obituary & Service Information

The family of Dale LaValley created this Life Tributes page to make it easy to share your memories.

Send flowers to the LaValley family.