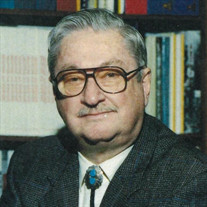 Clarence Birch Pontius, 93, passed into New Jerusalem on May 6, 2021. He was born on October 8, 1927 in Warren, Ohio and moved with his family to Tulsa in 1930. As a child, Birch was active in the Tulsa YMCA and an active camper at Kamp Kemp near Locust Grove, Oklahoma. He was awarded the prestigious Order of the Silver Arrow while at Woodrow Wilson Junior High, Tulsa. He graduated from Central High School in 1945 and attended the University of Tulsa, earning his Bachelor of Science degree in Management and Marketing in 3 1/2 years, Class of 1949. While serving in the U.S. Air Force in pilot training at Bryan AFB, he married the love of his life, Lt. Eleanor Lucile Meck on March 1, 1953. He was employed by Continental Oil (Conoco) as District Sales Representative in Salt Lake City and Oklahoma City. Pontius then worked for Phillips Petroleum in Raleigh, North Carolina and Charleston, South Carolina for 14 years. He changed professions and became a Special Agent for Northwestern Mutual Life and completed his Certified Life Underwriter (CLU) degree. He transferred back to Tulsa in 1969. Before his retirement in 1992, Pontius served under the great General Agent for Massachusetts Mutual Life, Mr. Hal Sundvahl. Under Sundvahl he won Special Agent of the Year and became a member of the Million Dollar Round Table. A prolific writer, Pontius authored four western historical novels set in the southwestern and southern states. A past member of the downtown Rotary Club of Tulsa for 20 years, he organized numerous fishing expeditions into Canada and the Southwest. He is preceded in death by his daughter Lisa Diane Richards, and by his beloved wife, Eleanor, who passed away on October 19, 2013, after more than 60 years of happiness together. He is survived by his son, Kevin Dean Pontius of Tulsa, and his daughter Lynnette Pontius Horner of Denver. He has five grandchildren and one great grandchild. Friends may donate to his favorite charity, The Beacon College Scholarship Fund: c/o First United Methodist Church 1115 S. Boulder Ave Tulsa, Oklahoma 74119 Services pending

Clarence Birch Pontius, 93, passed into New Jerusalem on May 6, 2021. He was born on October 8, 1927 in Warren, Ohio and moved with his family to Tulsa in 1930. As a child, Birch was active in the Tulsa YMCA and an active camper at Kamp Kemp... View Obituary & Service Information

The family of Clarence "Birch" Pontius created this Life Tributes page to make it easy to share your memories.

Clarence Birch Pontius, 93, passed into New Jerusalem on May...

Send flowers to the Pontius family.