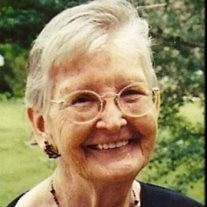 Daisy Irene Coulson Morefield passed peacefully in the early morning of January 17th, 2014. Her grandson Phillip, his wife Shantana and children Josie and Mia were at her side. Funeral services were held at North Park Trinity Baptist Church on January 18th, 2014 along with her husband, V.E. Morefield, who passed away January 7th, 2014, under the direction of Floral Haven. Memorials may be made in Daisy’s name to the Alliance for Animal Rescue and Rehabilitation c/o Gail Jackson, PO Box 1092, Claremore, OK 74018Daisy was born in Leslie, Arkansas to Linville and Ruth Coulson. In 1942 she received her teaching degree and taught grades 1-12 near Marshall, AR at Big Flatt, Cozy Home, and Cold Water AR in one room schools, winning recognition for her outstanding teaching skills. She received her nursing degree from Barnes Hospital in St. Louis, MO in 1946. She also received a scholarship to John Brown University but, as the sole provider for her two young children, she was unable to enjoy this educational opportunity. Moving to Tulsa, OK in 1951, she bought and managed rental properties while operating boarding houses. She also volunteered at the John 3:16 Mission where she met and married V.E. Morefield in 1955. In 1964 they moved to Gentry, AR where they owned and operated the largest dog kennel in Northwest Arkansas and Eddie’s Auto Repair. They moved to Catoosa, OK in late 2002 and then to Claremore, OK in February, 2003. She joined Eddie at Wood Manor Nursing Home December 31st, 2009, where she remained until her death.Daisy’s was also preceded in death by her mother, Ruth Blankenship-Coulson-Speer and father, Linville Daniel Coulson, and three brothers, Clifton, Paul and Perry Coulson. Brother and Sister-in laws, Fay and Bartley Morrison, Troy and Allie, Morrison.Daisy is survived by Maudie Jech of Gentry, AR and Bobby Coulson of Carrolton, TX; her daughter, Mary Frances Allen and husband Bill Allen of Claremore, OK; step-son Billy Coulson and his wife Nita of Owasso, OK; grandsons David McMahan and wife Ruby of Plano, TX; Phillip Allen and wife Shantana of Jenks, OK and ten great-grandchildren: Tyler, Elisha, Trey, Edie, Amelia, David, Joseph, Mia, Josie and Colten.

Daisy Irene Coulson Morefield passed peacefully in the early morning of January 17th, 2014. Her grandson Phillip, his wife Shantana and children Josie and Mia were at her side. Funeral services were held at North Park Trinity Baptist Church... View Obituary & Service Information

The family of Daisy Morefield created this Life Tributes page to make it easy to share your memories.