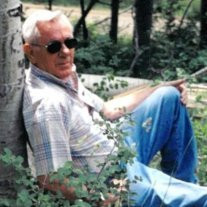 Darrell T. Jones, 87, of Tulsa, died Thursday, October 17, 2013. He was born on November 17, 1925 in Grand Rapids, Minnesota, the son of Thomas and Pearl Jones. He served in the United States Navy during WWII. On January 6, 1950, he married the love of his life, Rickey Archer, in Goodland, Kansas. Darrell had worked as a banker throughout his career. He enjoyed woodworking, reading, gardening, and volunteering with the American Red Cross, He is survived by his wife, Rickey Jones, children, Scott Jones, and his wife, Sandy, of Angel Fire, New Mexico, Chris Jones, and his wife, Virginia, of Agra, Oklahoma, and Stephanie Theban, and her husband, Ted, of Tulsa, grandchildren, Darrell Jones, Alicia Wharry, Lydia Theban, and Elizabeth Theban, great-grandchild, Peyton Wharry, and numerous other family members and friends. He was preceded in death by his parents, brothers, Stafford and Norman Jones, and sister, Florene Gilligan. A memorial service will be held at 3:00 PM, Tuesday, October 22, 2013 at Floral Haven Funeral Home Chapel.

The family of Darrell T. Jones created this Life Tributes page to make it easy to share your memories.