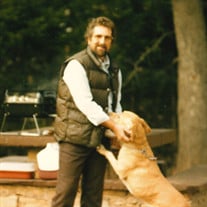 David Russell Bush, 82 of Broken Arrow, Oklahoma passed from this life on Thursday, September 24, 2020 in a Tulsa hospital. He was born July 2, 1938 in Cushing, Oklahoma to his parents, Russell Dick Bush and Florine Clarke Bush. He married the love of his life, Roberta Pendleton on May 26, 1987 and they have shared in over 33 wonderful years together. David attended and graduated from Central Hight School in Tulsa, Oklahoma. He graduated in 1956 and the day after graduation, he entered the United States Navy. He was very proud of his Naval service and was very active with the Veterans. He is a retired postal worker with 35 years of service. He joined the Masonic Lodge and became a Shriner. David was a very avid outdoorsman and he loved his yellow labs. He loved hunting, fishing and camping with his family and friends. He was always the one behind the camera to document the many family events. David is survived by his loving wife, Roberta Bush of Broken Arrow, Oklahoma; three children, Bryan McCartney and wife Frankie of Wagoner, Oklahoma, Shelley McCartney Adams of Bixby, Oklahoma and Jeff McCartney and Gayle of Wagoner, Oklahoma; one sister, Patricia Barnes and family of Tulsa, Oklahoma; seven grandchildren, Brad, Ashley, Casey, Aeriel, Zach, Cody and Adam; eight great-grandchildren, Jaydon, Conner, Haven, Bryce, Easton, Joseph, Rhett and Chevelle; and a host of friends and extended family members. He was preceded in death by his parents, Russell Bush and Florine Lawrence and one daughter, Deann Bush. The family will hold a memorial service at 11:00 a.m. on Thursday, October 8, 2020 at the Broken Arrow Church of the Nazarene.

David Russell Bush, 82 of Broken Arrow, Oklahoma passed from this life on Thursday, September 24, 2020 in a Tulsa hospital. He was born July 2, 1938 in Cushing, Oklahoma to his parents, Russell Dick Bush and Florine Clarke Bush. He married... View Obituary & Service Information

The family of David Russell Bush created this Life Tributes page to make it easy to share your memories.

Send flowers to the Bush family.