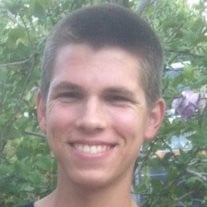 David Edward Gibson brought great joy into the world on December 8, 1992. He was born in Tulsa, Oklahoma at Hillcrest Hospital and was an inspiration and a great example of faith to all who came into contact with him.David is the fifth oldest of eleven children belonging to Paul & Tracy Gibson. David passed from this earth to heaven on June 19, 2013 at age 20. David attended Lincoln Christian School in Tulsa, Oklahoma from kindergarten until he graduated in 2011. While still in high school David worked in his familyâ??s business, Mustang Trucking, doing shop and mechanic work, running equipment such as a dozer, trackhoe and dump truck. He also worked part-time for his older brothers at Earthsmart Construction doing the same. After graduating high school, David attended Tulsa Community College part-time while also undergoing chemotherapy for his new diagnosis of bone cancer. When the chemo treatment was complete, he started an Electrical Apprenticeship with Marrs Electric, working full-time and also attending school once a week. He was working towards his Electrical Journeymanâ??s license. From age 15 years old until age 17 he was an active member of the Civil Air Patrol and also participated in the Color Guard. As part of CAP he was involved and trained in rescue missions and flew a Cessna plane on several occasions with an instructor. David volunteered at Church on the Move in the Childrenâ??s Education Department working with 5 year old children. He also worked at Dry Gulch on the Grounds Crew for 2 years during summer camp. He enjoyed working outside and never minded getting dirty. When diagnosed in July of 2011 with his first episode of cancer, David maintained a good, strong attitude. He underwent chemotherapy and received an arm implant, and later, when the tumor returned, had to have his entire left arm and shoulder amputated. David rose to the challenge of facing every obstacle with not a single complaint. Upon learning that the tumor was again showing up in his lungs, David changed the strategies of his battle. David attended the LifeStyle Center in Branson, Missouri for nutrition training to change his lifestyle to that of one based on healthy eating and better decisions. This had amazing results in his body and immune system, and David enjoyed the last year of his life tremendously. He traveled to South Dakota with his family and to other places on his own, and he always looked forward to hanging out with his friends to attend the movies and have paintball and air soft battles. David seemed to make an impression on everyone he met. His big smile and positive attitude were his greatest attributes. He loved God with all of his heart and was very strong in his faith. He loved to help people and was always willing to volunteer. David loved to be outdoors riding motorcycles, four-wheelers, jet skis and snowmobiles. His greatest memory was when the big blizzard hit Tulsa and he, his dad and his brother rode snowmobiles on the interstate, traveling as far as downtown Tulsa, where they helped rescue several stranded people and assisted emergency vehicles in freeing themselves from the snow. The three of them even made it onto the local news. He was always a joy to be around and was a very strong person, enjoyed life and always looked to the future. David Gibson is survived by his parents, Paul & Tracy Gibson; brothers, Kyle Gibson, Dwayne Gibson, Rex Gibson, Colby Gibson, Darien Gibson, Nathaneal Gibson, and Chuck Gibson; and sisters, Sherrie Gibson, Elaine Gibson and Shana Gibson. In addition to those closest to him, David has also touched the lives of numerous extended family members and friends. David is now enjoying his eternal reward and is anxiously awaiting the great reunion when he will be with all of his loved ones.

David Edward Gibson brought great joy into the world on December 8, 1992. He was born in Tulsa, Oklahoma at Hillcrest Hospital and was an inspiration and a great example of faith to all who came into contact with him.David is the fifth oldest... View Obituary & Service Information

The family of David Edward Gibson created this Life Tributes page to make it easy to share your memories.