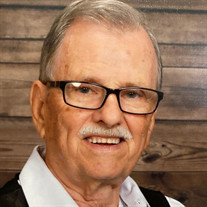 “Let not your heart be troubled; you believe in God, believe also in Me. In my Father’s house are many mansions; if it were not so, I would have told you. I go to prepare a place for you. And if I go and prepare a place for you, I will come again and receive you to Myself; that where I am, there you may be also.” John 14:1-3 David Martin was born in Spencer, Indiana on July 19, 1936 to Frank and Dorothy Martin. On Tuesday, January 12, 2021, with his wife by his side, he went to his heavenly home. David grew up in Spencer with his sisters, Elouise and Helen. After graduating high school, he went to business school and eventually moved to Tulsa, Oklahoma in 1968 where he began his career with Sun Oil Company. He worked many years at their offices in downtown Tulsa, then served as manager of the tank truck terminal for several more years before retiring in 1991. David also worked part-time for over a decade in the credit department at Sears and Roebuck Company. In retirement, he enjoyed working part-time in real estate, first for Bryant Properties, then as an independent broker. While one of David’s character strengths was his work ethic, his priority was being a devoted husband to Beverly, his wife of thirty-two years. David and Beverly were best friends and exemplified a blessed marriage. David and Beverly met at Victory Christian Center and worshiped together for many years both there and at Church on the Move. David was a faithful follower of Christ his entire life. In retirement, he attended and graduated from Victory Bible Institute. For years, he and Bev prayed together daily for their family. David was also a loving father and grandfather. David adopted his daughter, Lisa, at the age of three. His sons, Paul and Keith, fondly remember weekend chess games over root beer floats, ping pong tournaments in the garage, and in more recent years, numerous fishing outings with their dad. David also enjoyed wonderful relationships with his daughter Kim and son Bruce, their children, and their grandchildren. David enjoyed gardening, maintaining his yard, relaxing with Bev under their shade tree, and watching old westerns. He looked forward to his and Bev’s nightly ritual of watching Jeopardy, playing board games, and laughing much together. David is preceded in death by his parents, Frank and Dorothy Martin, and by his sisters, Eloise Masten and Helen Brown. David is survived by his wife Beverly, children Kim Hansen and her husband Tom of Wichita Falls, Texas; Bruce Lilly of Tulsa; Lisa Riggs of Bartlesville; Paul Martin and his wife Sherri of San Clemente, California; and Keith Martin and his wife Julie of Grove, Oklahoma; 14 grandchildren, and 13 great grandchildren. David was and would want to be remembered as, a man of faith, integrity, humility and steadfastness. He had a gentle heart, and grew in grace and in his faith for his entire life. The LORD is my strength and song, And He has become my salvation. Psalms 118:14 In lieu of flowers, the family requests that donations be made in Danny's honor to Samaritan's Purse- www.samaritanspurse.org/ Services will be held at 1pm on Tuesday, January 19, 2021 at the Floral Haven Heritage Mausoleum.

The family of David Lee Martin created this Life Tributes page to make it easy to share your memories.

“Let not your heart be troubled; you believe in God, believe...

Send flowers to the Martin family.