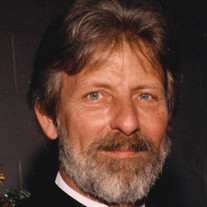 Dean William Alford, 71, resident of Broken Arrow, Oklahoma passed away April 19, 2021. He was born November 8, 1949 in Park Forest, Illinois to George and Dorothy Alford. Dean was raised attending the Catholic Church and his faith was very important to him. He was a member of the Kappa Sigma fraternity while attending the University of Oklahoma. Dean was an Electrician by trade and always enjoyed lighting up people's lives. After college he began his career when he went to work for his good friend, Gary Dean at "Gary's Electric" in Tulsa. A few years later he ventured into starting his own business, "Alford Electric" in Tulsa. Dean eventually went to work for Tulsa Tech were here retired in 2013 as Project Coordinator. Dean was married to the love of his life, Anne Alford (Wilson). The couple shared 39 years together until her passing in 2015. Even after her death Dean continued deeply loving her until he rejoined her on April 19th when he was called home to Heaven. Dean was an over-the-top Oklahoma Sooner football fan and definitely bled "Crimson and Cream". He lived for Sooner dominance over in-state rival Oklahoma State and The University of Texas. Dean loved hanging out with all of his friends he met over the years at Potbelly's Bar and Grill in Broken Arrow. Dean will be missed by everyone who knew and loved him. Dean was preceded in passing by his parents, George and Dorothy Alford and his wife, Anne Alford. He is survived by his brother, Rick Alford and his wife, Jill of McKinney, Texas; brother, Rusty Alford and his wife, Cathy of Deland, Florida; brother, Tom Alford and his wife, Sue of Rockwall, Texas; son, Chris Paxton and his wife, Angela of Tulsa, Oklahoma daughter, Kimberly Reuben of Metairie, Louisiana; six grandchildren; four great-grandchildren and numerous other family members and friends. The family would like to give special thanks to John and Lacy Barela for making Dean a part of their family and caring for him the last 2 years of his life. They can NEVER be thanked enough; and were a blessing to Dean. Visitation will be 4-6 pm, Monday, April 26, 2021 at Floral Haven Funeral Home. Funeral Service will be 3:00 pm, Tuesday, April 27, 2021 at Floral Haven Funeral Home Chapel. For those that cannot attend webcasting will be available at the following link: https://webcast.funeralvue.com/events/viewer/52954/hash:5FF1680E9A698560

Dean William Alford, 71, resident of Broken Arrow, Oklahoma passed away April 19, 2021. He was born November 8, 1949 in Park Forest, Illinois to George and Dorothy Alford. Dean was raised attending the Catholic Church and his faith was very... View Obituary & Service Information

The family of Dean William Alford created this Life Tributes page to make it easy to share your memories.

Send flowers to the Alford family.