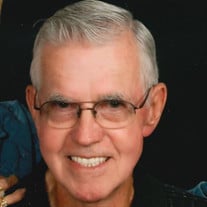 Dennie Lee “Corky” Crawford, of Broken Arrow, passed away on Sunday, April 19, 2020, at the age of 82. He was born on June 27, 1937, to Charlie and Bonnie (Roy) Crawford in Tulsa. He graduated from Broken Arrow High School in 1955 and served a tour of duty with the US Army following high school. In 1962, he married Loreta Lou Keck and worked for his father as an auto mechanic before taking over the business in late 1970s, retiring in 2008. Corky became involved in racing at Tulsa Speedway with both of his brothers in late 1950s, winning the track championship in 1972. He walked away from the sport he loved in 1975 to spend more time with his family. He spent the next 15 plus years at baseball games, football games, band concerts, rodeos, fairs, and wrestling matches supporting his kids in all their activities. During that time, he also found his way back to the racetrack, spending time helping and watching his sons race. He was preceded in death by his wife of 52 years, Loreta (Keck) Crawford; parents, Charlie and Bonnie (Roy) Crawford; brother, Jerry Crawford and sister, Charlotte Crawford. Survivors include his daughter, Rebecca Jean (Crawford) Ondracek and husband Jon; grandchildren, Sara (Ondracek) Stout and husband Jason (great-grandchildren Hattie, Cooper and Lucas); Sydnie (Ondracek) Ritze and husband Jamey (great-grandchild James); son, Keith Crawford and wife Michelle; grandchildren, Macy, Joey, and Megan; son, Bobby Crawford; grandchildren, Jordan, Jasmine, and Trey; brother, Ray Crawford. Viewing will be held Wednesday, April 22nd from 3:00 pm to 5:00 pm with a limited of 10 or less people at a time. Private Family Services will be held. In lieu of flowers, donations may be made to the Donnie Ray Crawford Legacy Foundation.

The family of Dennie "Corky" Lee Crawford created this Life Tributes page to make it easy to share your memories.

Dennie Lee “Corky” Crawford, of Broken Arrow, passed away on...

Send flowers to the Crawford family.