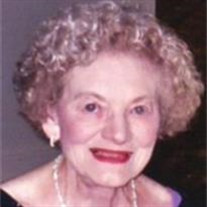 Denzil Irene Brummett passed away at her home in Tulsa, on Tuesday, October 18, 2005. Denzil is survived by her husband of 64 years, Delmer Brummett, her three children, Howard Brummett (Penny), Duane Brummett (Mary), and Cheryl Brown (Mike), her sister, Margaret Louise Taylor (Hanson), her grandchildren, Leslie Ball (Brian), Leanne Phelps (Nathan), Jenny Vargo (Dan) and Beke’ Heald (Greg), her great grandchildren, Brittany and Braden Ball, and a host of nieces, nephews and friends. She was preceded in death by her parents, Clarence and Iva Louiza Lollar; sisters, Eunice Maxine Lollar, Deloris Short, Doris Hacker, and Dorothy Mallory; and brother, Jim Lollar. Denzil was born in Arcola, Missouri, in 1919. She moved to Tulsa to attend Draughon’s Business College. In 1941, she married Delmer Brummett who had to leave for the war. After returning from the war in 1945, they purchased a home in Tulsa, started their family, and never moved again. Denzil loved her family, church, friends, cooking, fashion, quilting, playing canasta, and pitch with family and friends. During her early years, she and her sisters formed a gospel singing group: The Lollar Sisters. Denzil loved music all of her life. Denzil was well known for her enthusiasm for life. She loved fashion and clothes. She worked for many years selling women’s sportswear at Vandever’s Department Store, where she mixed her love for clothes and her love for meeting and talking with people. She will be remembered for many things, not the least of which will be her coconut cream pies. Denzil told everyone that she measured success in her life by raising happy children who have love in their lives. She stated that she had succeeded in all of her lifetime goals and now she was ready to go to be with Jesus. She will be remembered as a woman with class, style and love. Funeral services will be held at 3:00 pm on Friday, October 21st, at Floral Haven Funeral Home Chapel.Survived By: loving husband of 64 years: Delmer Brummett of the home, Tulsa, Oklahoma; children: Howard Brummett and wife Penny, Independence, Missouri, Duane Brummett and wife Mary, Niceville, Florida, and Cheryl Brown and husband Mike, Tulsa, Oklahoma; grandchildren: Leslie Ball and husband, Brian, Leanne Phelps and husband, Nathan, Jennifer Vargo and husband, Dan, Beke` Heald and husband, Greg; great-grandchildren: Brittany and Braden Ball; sister: Margaret Louise Taylor and husband, Hanson; a host of nieces, nephews and friends.

The family of Denzil Irene Brummett created this Life Tributes page to make it easy to share your memories.

Denzil Irene Brummett passed away at her home in Tulsa, on Tuesday,...