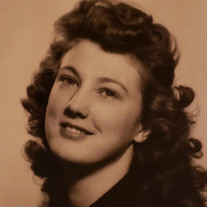 Doris Mae Robinson, 91, of Broken Arrow, Oklahoma died July 23, 2020 at home in Broken Arrow. She was born April 19, 1929 in Itasca, TX to Thelma and Earnest Hooper. Doris graduated from West Texas State college high school and attended Amarillo Business College in Amarillo, TX. After graduation she worked as a stenographer for Phillips Petroleum in Borger, TX. Doris’ older brother Bervin introduced her to a handsome young man named Leslie Robinson in July 1948. They were engaged in November 1948 and married a year later in November 1949 at her parents’ home in Borger, TX. Doris and Leslie moved to Houston, TX where their daughter Cherri Mae (Robinson) Phelps and son James Leslie Robinson were born. Doris wanted all her children to be born in TX, so even though they moved to Broken Arrow, OK in 1959, she returned to Borger, Texas to give birth to her youngest son David Alan Robinson. Doris went to work as a lunch lady in the Broken Arrow Public School system when her kids started school. She worked at Oak Crest public school until her retirement. Doris was a member of First United Methodist Church and after her retirement, she and Leslie served there in the nursery and as greeters. The family enjoyed camping in Oklahoma and Arkansas and trips to Texas. Doris loved her grandkids. Her grandkids would spend summers at her house. One of their summer activities was spraying her grandkids with the water hose while they jumped on the trampoline in the back yard during the hot Oklahoma summer. She also loved to collect dolls, sew, crochet, and work in her yard. For many years she loved to participate in the Hooper Thanksgiving family reunion. Doris and Leslie would arrive early to help Bervin and Joyce get ready, enjoy visiting with extended family, and then stay to clean up. Doris had unlimited energy and was always serving others. She loved people and had a big heart. Doris was a member of the beta sigma phi sorority and enjoyed many celebrations with this group of friends who were like sisters to her. Doris was proceeded in death by her Father, Earnest Hooper, her Mother, Thelma Mae (Turner) Hooper, Brothers Merlin, Bervin, Thomas, and James Ross, and Grandson Shane. Doris is survived by her daughter Cherri Phelps, sons James Robinson and David Robinson, six grandchildren and four great grandchildren. Services will be held at 12:30 pm on Monday, July 27 at the Floral Haven Chapel.

The family of Doris Mae Robinson created this Life Tributes page to make it easy to share your memories.

Send flowers to the Robinson family.