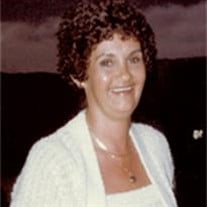 Dorothy “Dottie” Stepp, age 71, passed away, Saturday, December 13, 2008. She was born March 9, 1937 to Art and Audie Lamascus in Okmulgee, Oklahoma. Dottie was married to John Stepp on June 21, 1951 in Stilwell, Oklahoma. She was preceded in death by her parents, and one brother, Warren Lamascus. She is survived by her husband of 57 years, John Stepp; children, Steve Stepp, Vicki Lynn Hightower, and Bruce Stepp; grandchildren, John Corey Stepp, Christopher Hightower, Keelan Hightower, Jake Hightower, Aubriana Hightower, and Reed Stepp; and one great-grandchild, Noah Stepp. A celebration of Dottie’s life will be held at 3:00 P.M., Friday, December 19, 2008 at the Floral Haven Funeral Home Chapel. She will lie in state until 2 hours prior to service time.Survived By:

The family of Dorothy Stepp created this Life Tributes page to make it easy to share your memories.