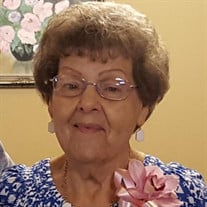 Edna Fern White, 87, was born on April 4, 1933 in Pryor, Oklahoma and passed on March 6, 2021 in Owasso, Oklahoma. Edna went to school in Tulsa and later transferred out to California, where she met Ken White in 1954. Ken and Edna married shortly after on May 8, 1954. They were married a loving 62 years, before he passed in January of 2016. They had two children together, Greg and Pam. The family traveled all of the country for Ken's job, but ended up settling in Tulsa to focus on raising the kids. She was always supportive of her children's sporting events and other extracurricular activities. She was a great cook, and made sure to pass along her skills in the kitchen. She will always be remembered as an amazing wife, mother, grandmother and great grandmother. Once the kids were out on their own, Edna went to work for the Tulsa Public Schools system. She worked 17 years before retiring and embracing the country living lifestyle by growing huge gardens. They found Oologah Assembly of God and fell in love with the teachings of Pastor Kent and Tammy, and with all of their brothers and sisters in Christ. Edna is preceded in death by her parents Clarence M. Winnett and Alice Marie Winnet; sister Ruth Winnett; and husband Kenneth R. White. She is survived by her children Bret Gregory White and wife Brenda, and Pamela Gail Harp and husband Ross; grandchildren Kendra J. Wiggins and husband Owen, and Camron M. Harp; great grandchildren Max Wiggins, Bryson Wolz, and Avery Wolz; brothers Billy R. Winnett and wife Darlene, and Bobby J. Winnett; and sister Edith Urlaub; many nieces and nephews; and tons of friends. Funeral Services will be held on Tuesday, March 9 at 12:30 pm at the Floral Haven Chapel, with visitation held an hour beforehand. For those unable to attend, follow the link for webcasting services: View Funeral Webcast

Edna Fern White, 87, was born on April 4, 1933 in Pryor, Oklahoma and passed on March 6, 2021 in Owasso, Oklahoma. Edna went to school in Tulsa and later transferred out to California, where she met Ken White in 1954. Ken and Edna married shortly... View Obituary & Service Information

The family of Edna White created this Life Tributes page to make it easy to share your memories.

Send flowers to the White family.