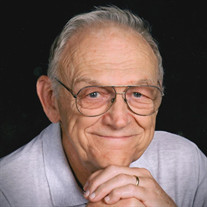 Edward John Gibeau, 87, passed away December 10, 2021, in Broken Arrow, OK. Edward was born May 15, 1934, in Kenmore, NY to Earnest John and Marion Elizabeth (Fessey) Gibeau. Ed was raised in the suburbs of Buffalo, NY, and graduated from The University of Buffalo which is now known as The State University of New York at Buffalo with a BS degree in industrial engineering. After his graduation, he then entered the Air Force in 1958 as a Reserve Officer and served in the Air Force as a meteorologist and staff officer until his retirement in 1979 as a Major. During those 21 years, he was assigned to overseas bases in England, Germany, and Vietnam and, within the US, to assignments in Pennsylvania, Oregon, California and Nebraska. During his Air Force career, he earned a BS degree in meteorology from Pennsylvania State University, an MS degree in atmospheric physics from the University of Michigan, and a MA degree in public service from Ball State University. He received service awards that included the: Bronze Star, Air Force Commendation, and Meritorious Service medals. After retirement from the Air Force, Ed moved to Tulsa to work for a small Tulsa aerospace firm called Aeromet which is located at R.L. Jones Airport in Jenks and worked there for twenty years as a meteorologist, scientist, and as head of human resources. Ed then retired for the second time in 1999. During Ed’s time at Aeromet, the company grew from 10 or 12 employees to over 150 employees and is now owned by L3 Communications. After retiring from Aeromet, Ed served on the Board of the Center for Counseling and Education, a Tulsa nonprofit that offers psychotherapy services to those in need. In 2005 Ed joined the Board of the Oaks Indian Mission which was founded in 1801 by the Moravian Church and transferred to the Lutheran Church in 1903. Ed served as the Board President from 2008 - 2012. He worked closely with staff to assist in making significant changes in the programs for the children there that continue to this day. Ed was a member of Fellowship Lutheran Church since he and the family moved to Tulsa in 1979. He served on numerous committees providing leadership for the congregation. Ed is survived by his children, Christopher Gibeau, Neil Gibeau and his spouse Karin, Sara Belczak and her spouse Paul, and Nghia Baker; Grandchildren Eric Gibeau and his spouse Dannie; Noël Gibeau and her partner Jason Foberg, Andrew Gibeau and his spouse Jen, Carianne Gochenouer and her spouse James, and Shane McLearan; Great Grandchildren, Summer Gibeau, Ambree Gibeau, Brody Gibeau, Koa Paul Makanapohākeaikuaola Gochenouer, Katy McLearan, and Orion McLearan; Sister, Jean Jacobson; Niece, Lisa. Ed was preceded in death by his wife Vivian in 2000; Niece, Jennifer. In lieu of flowers, memorial contributions may be made to Oaks Indian Mission www.oaksindianmission.org or P.O. Box 130, Oaks, OK 74359 Visitation will be 3:00 PM to 6:00 PM, Wednesday, December 15, 2021 at Floral Haven Funeral Home. The funeral service will be 12:30 PM, Thursday, December 16, 2021 at Floral Haven Funeral Home Chapel.

Edward John Gibeau, 87, passed away December 10, 2021, in Broken Arrow, OK. Edward was born May 15, 1934, in Kenmore, NY to Earnest John and Marion Elizabeth (Fessey) Gibeau. Ed was raised in the suburbs of Buffalo, NY, and graduated from The... View Obituary & Service Information

The family of Edward John Gibeau created this Life Tributes page to make it easy to share your memories.

Send flowers to the Gibeau family.