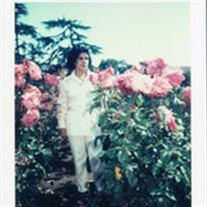 Elvira Ramirez Hyrup passed away October 22, 2011 surrounded by family in Tulsa Oklahoma.Â Elvira was born in Van Nuys California on July 17, 1934.Â She was the daughter of Joseph Ramirez and Anita Lopez Ramirez.Â She was also the sister of... View Obituary & Service Information

The family of Elvira Louise Hyrup created this Life Tributes page to make it easy to share your memories.