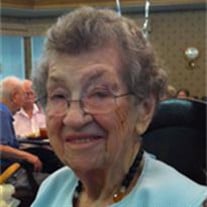 Frances Catherine Williams Frances Catherine Basler was born October 23, 1922, near Rhea, Oklahoma in Dewey County. Frances was the eighth of nine children born to Joseph Isidor Basler and Claudia Estella Adkisson. She attended Eureka School which served as a church and one room school from 1st through 8th grades. Francesâ?? mother died when she was six and all nine kids worked with their father to keep the farm going. Her six brothers and two sisters eventually left home, married or went to war. The family lost one brother and son at the Battle of the Bulge. Frances married Floyd William on December 20, 1943, during his leave from the Army. From the time they met until Floyd returned from the war on Christmas Day, 1945, their courtship and young married life was spent communicating through the mail which would often take weeks. Frances and Floyd had two children. Karren was born September of 1946 and Kenny was born February of 1952. The Williams family moved to Tulsa in December of 1952, and Frances thought she was on vacation after all the years on the farm. They moved to Lake Keystone in June 1964, For thirty years, Frances attended the Church of Christ in Mannford and Floyd was baptized there at the age of seventy three. Frances was a homemaker most of her life but spent thirteen very satisfying years at Hissom Memorial taking care of handicapped children. She retired from Hissom at sixty two and she and Floyd spent several years pulling a travel trailer in a caravan of family and friends. In 1994, the Williams moved to Tulsa to be closer to family. Frances was baptized into Christ at North Sheridan Church of Christ around 1958 and returned to that church when they moved back to Tulsa. Several years ago, she and Floyd placed their membership in the Down Town Bixby Church of Christ where other family members attended. Frances attended services at Bixby until she became immobile in March of 2011. Frances was preceded in death by her husband of fifty-eight years, Floyd, and her son, Kenny, as well as all of her brothers and sisters. She is survived by her daughter and son-in-law, Karren and Jack Darrough of Tulsa. She had five grandchildren â?? Cindy Darrough of Bixby, Sandi and James Donnell of Bixby, Amanda and John Bargas of Glen pool, Victoria and Jeff Gatwood of Sand Springs, and Joshua and Jennifer Williams of Glenpool. She also had eleven great-grandchildren â?? Philly and Dalton Irvin, Tanner and Payton Donnell, Kylee and Camryn Bargas, Olivia Williams and Jaycee Gatwood, and Nathan, Andrew and Ethan Williams. She also leaves behind many other relatives and friends.

The family of Frances Catherine Williams created this Life Tributes page to make it easy to share your memories.