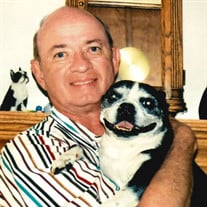 Gary Dale Beatie was born to Newell and Pauline Beatie on April 25, 1937, in Enid, OK. He married his Medford High School Sweetheart, Ruth, on September 11, 1959 during his last year at Oklahoma State University, and they were married for 60 years 2 months. They were 16 year old sophomores when on their first date, they helped with the Junior/Senior Prom, which was the tradition at Medford. Gary became a Mason at 18 years old and later a 32 Degree Mason. He was drafted into the Army one month after graduating from college. After basic training at Fort Riley Kansas, he was given a Confidential Rating and sent to Milwaukee, Wisconsin where he administered tests and medical procedures for all Wisconsin draftees. Both sons, Brian and Steve, were born in Wisconsin and after being discharged from the Army, he started his first job as a Buyer for J.C. Penny Catalog Division. After declining a move to New York City, he went to work for General Electric Medical System Division. Tired of the cold and after the passing of his mother, he moved his family to Tulsa in 1969 where he worked for 4 years as Supervisor of Purchasing for Telex, and eventually for Amoco Research Center, where he retired after 22 years. Gary was very involved in his son’s lives as they were growing up. He was their Cub Scout Pack Leader and later served as the Boy Scout Indian Nations Advancement Chairman for Northeast Oklahoma for many years, earning him Boy Scout’s highest honor, the Silver Beaver Award, in February 1989. Gary served as President of the Tulsa Purchasing Management Association and was awarded the W.L. Bill James Award for outstanding service. Gary began serving as a volunteer over 20 years ago at SouthCrest Hospital and continued when the hospital became known as Hillcrest South, up until his passing. Gary was a devoted member of Asbury United Methodist Church since 1969. He sang in various church choirs throughout the years. He, like Ruth, was a glad member of his Sunday School Joy Class, served in the kitchen, as an Usher, and in other varying church supporting capacities, all for many years, up until his passing. Gary loved all animals, especially dogs, and was devoted to his 12-year-old Boston Terrier, Daisy. Gary possessed a true and giving servant’s heart and did unknown giving to untold numbers of people, animals, and charities, all throughout his life. His family, friends, and acquaintances are better for having known him. Gary was predeceased by his wife of 60 years, Ruth in 2019, and Grandson Kyle, in 2017. Gary is survived by sons Brian and his wife Angie, and Steve and his wife Jenny; four grandsons Trey, Cole, and Bret and his wife, Camryn, and Daniel and his wife, Diana, and great-grandson Henry. The memorial service will be 11:00 AM, Saturday, January 22, 2022, at Asbury United Methodist Church Chapel, 6767 S Mingo, Tulsa, Ok 74133 Here is the link to the live stream of Gary’s service. https://asburytulsa.org/event/4897853-2022-01-22-beatie-funeral-service/

Gary Dale Beatie was born to Newell and Pauline Beatie on April 25, 1937, in Enid, OK. He married his Medford High School Sweetheart, Ruth, on September 11, 1959 during his last year at Oklahoma State University, and they were married for 60... View Obituary & Service Information

The family of Gary Dale Beatie created this Life Tributes page to make it easy to share your memories.

Gary Dale Beatie was born to Newell and Pauline Beatie on April...

Send flowers to the Beatie family.